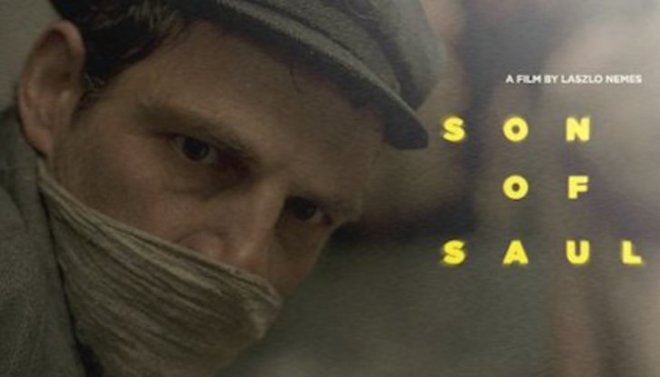 I’m finding it unfathomable to write about this film, in the same way the film’s subject matter deals with an unfathomably vast chasm of the human condition.

To start I guess, two words to describe the film. Visceral and muscular. Son of Saul is the directorial debut of László Nemes. It is also a film which is so intense, so utterly enveloping, that it simply makes you forget the film is itself a film, as you bear witness to a terrifying brutal reality seething into a nightmarish hell. It’s cinematic language is sparse and militant, it compounding the frame to only follow Saul himself, never to allow the audience to be separated from his perspective, never to give us the familiarity of watching the events unfolding from a God’s eye perspective.

Much has been made of this technique, chaining the audience to the perspective of Saul (Ex. here) and how astonishingly powerful its impact is, which I think reveals an unconscious prejudice any audience member expects when watching a movie.

By “chaining” the film to Saul himself, the film takes on a perspective rarely exploited by cinema, the perspective of one character throughout a larger story. Saul is privy to his own personal quest (of burying the boy he believes is his son) whilst also being a part in the group who plan to cause an uprising. This is no Shakespeare, where we move across space to see the other character’s motivations. We only infer what we can from Saul’s spatial-temporal interactions with the other people of the camp, we know they are looking for gold and valuables when he is instructed to “look for shinies.” We only know what package Saul plans to pick up, after it is revealed he lost it and it does not matter. The film is ruthless in its disregard for audience involvement in the story, which is a very good thing.

“I wanted to make a film about that because people tend to consider the concentration camp as either something remote and abstract or historical, not really taking place here and now. Or in a very over-aestheticised fashion. I wanted to make it harder for other people to make films in the camp because it’s so easy to go there but it should be very hard to go there. You have to have the responsibility as a filmmaker to go there and talk about it. I wanted to bring the present of it, the here and now, and not this remote point of view.”

Too often, a film doing its best to portray an accurate representation of a historical time can be diluted by the behind-the-scenes production attitudes and agendas. This is why up until this film, portrayals of the holocaust have been hampered by dramatic interpretation and expectation. A perfect example of this might be this scene from X-Men (2000):

This scene itself is created in a dramatic way, which (perhaps unconsciously) sidesteps the true nature of the reality of Auschwitz. The music swells, the violence is only implied by jostling guards, the mother howls in agony at the loss of her son. It might be seen as the “common sense + hindsight” approach to understanding a situation, and might work in this scene as follows:

Of course, this seeps into the way the film is constructed, because we know what happened there, we expect it to play out in this fashion. But in reality, the Jews did not know what lay in wait for them at the camps. The Sonderkommando (Saul’s “unit”, who were Jews who helped shepherd the arrivals into the gas chambers, cleaned the floors, cleared the belongings etc.)  were there to guide the unsuspecting arrivals, on regular days.  This is the key difference, is that the projection of the Holocaust in X-Men takes place in an ominous, foreboding atmosphere. The rain, the mud, the gloom. One of the triumphs of the film is that it helps to replicate the reality; that the systematic and merciless extermination of the Jewish people took place on regular normal days. Not in the image of history we might recreate (one of despair, horror) but the one that probably came to pass (that of confusion, unease which then segued into dread and horror.)

This is quite obtuse, but really its portrayal of cinematic realism through art direction and cinematography is just so unlike what we’re used to in “regular cinema”, a heightened reality where we have access to multiple viewpoints and imagine things to correlate with our feelings about them, rather than how they really looked.

The final thing to be talked about is the humanity of it all. That earlier review had the tagline “Son of Saul will leave you too numb to weep.” It’s an interesting point to provoke, because we often associate tragedy with sadness, empathy, agony. But Son of Saul indulges in none of that, a blunt refusal to cede ground to the audience so that they may connect with the film, as if in some way they could relate to what’s going on, in some primordial human connection. If anything, it makes a case for just how unique the circumstances for the Sonderkommando were. The world they lived in was not one inhabited by regular humans (Saul’s last name, Auslander, means ‘alien’), it was a world of extreme inhumanity. Yet Saul’s quest is the glimmer, the spark of humanity that is never extinguished, not even under the most torturous of conditions.  Saul’s lack of expressive emotion seems alien to us, in the same way the horror’s of the concentration camps seem unimaginable as opposed to those who actually experienced them. It’s a world we can only stare into, never fully understand or translate.

If anything, the restraint expressed by both Géza Röhrig (and by extension his director, László Nemes) proves that old adage of less is more, as the only perceptible emotive act (Saul’s smile) speaks a thousand words, more than could ever be said by flashy dialogue or expressive acting.

Son of Saul is a film that could only have been made by someone who deeply cares about these events, and someone who’s commitment to portraying the story authentically (not necessarily realistically or metaphorically, but a mixture of the two) was not hindered by a filmmaker worrying about whether his audience would like his film or not. More please.

2 thoughts on “Son of Saul”