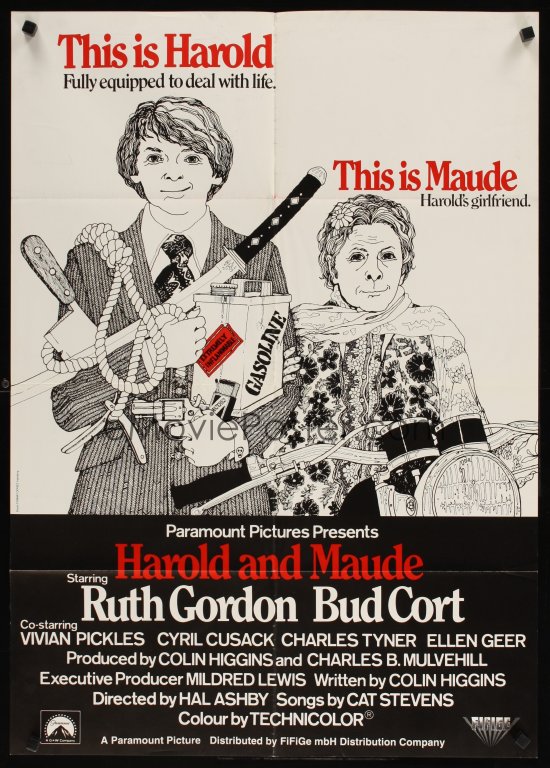 Dear Reader, today marks the first post not written by this site’s first author. This essay concerns Hal Ashby’s 1971 picture, Harold and Maude, and is written by a dear friend of mine, currently studying a degree in English Literature and Film Studies. I won’t say any more, other than he’s seen far more films than I have and I envy him greatly for it.

Harold and Maude is a name you very well may have heard and know, however why is this? This story of two lovers, one in his early 20s and the other bordering 80 has been a central example of cult cinema since its release in 1971. However what is it that has drawn people to this deeply strange 70s romantic comedy, despite the film not being a great success upon first release?

The film does not perhaps have the same cult status as something like Blade Runner or The Rocky Horror Picture Show, both of which have become lauded by either critics or fans. Harold and Maude instead has retained its popularity steadily throughout the decades seemingly just through the strength of the film itself and not through any real dedicated effort by a fan base. This is not to belittle the previously mentioned films, Harold and Maude is just an interesting inclusion to what has now almost become a genre of films in and of itself. Cult cinema is usually rooted in genre, most noticeably horror or sci-fi, for a romantic comedy to occupy the same status is odd. However it does feel apt when it comes to Harold and Maude for it to retain this status as a cult classic. The film as already mentioned has an off kilter subject matter which may deter viewers, however this is to their own detriment.

The film when just taken at a basic plot level shouldn’t work, a boy obsessed with staging his own suicide falls in love with a youthful old woman. It’s just such an unusual way to stage romance. But when seen it is clear that the absurdity in the story gives the film such a lasting effect in the cannon of cult cinema. Much like Wes Anderson, whose clear influence from the film has been noted the offbeat nature of the love stories in his films have only elevated him in this post-modern landscape to great success. If only Hal Ashby in his time had been able to enjoy the same virtues.

The films tone could easily slide into the realm of creepy or even saccharine but this is deftly avoided by Ashby. Upon release Roger Ebert hated the film stating ‘The visual style makes everyone look fresh from the Wax Museum, and all the movie lacks is a lot of day-old gardenias and lilies and roses in the lobby, filling the place with a cloying sweet smell.’ A sentiment which whilst as always incredibly well written I disagree with. While this isn’t the most visually stimulating of films, I feel that this is not what the film is trying to achieve. Harold as a character may be a strange and morbid boy but he is in a way the emotional heart of the film. Despite Maude in her youthfulness and appreciation of life, it is Harold who I felt really grabbed me. Through his indifference to the world you can see why he is like that, with nothing to do and no one to talk to he can only express himself in violence and nihilism. Following the death of his father he has become obsessed with trying to be dead despite wanting to be alive. He is stuck in a distinctly conservative American world, one where everyone around him feels he needs to do more even if that means going to war in Vietnam. Harold’s attitude for life should strike a chord with anyone who’s felt the crushing boredom of not knowing what or why they are doing anything.

Maude as a character embodies almost the complete opposite to Harold, if Harold is darkness Maude is blinding light. Ruth Gordon is such a strongly optimistic portrayal of a woman in old age it is hard to not fall in love with her yourself. After being shown the darkness of Harold’s mind-set, the optimism and light which comes from this old woman with everything to live for and nothing to lose is beautiful. The question of age shouldn’t and doesn’t matter to these two, and in turn it doesn’t matter to the audience.

This all being said I don’t think that this should be heralded as some example of incredible film-making. This is why I feel that perhaps Ebert is a little harsh to the film in saying it makes everyone look like a wax figure. Yes its death obsessed and has a muted visual style but does it really matter in a film like this? It’s more a character study and a rallying cry for the little man than Ebert gives it credit for. By focusing on these two weirdo’s on the outskirts of society Ashby is looking more at character and dialogue than his own auteurship. The acting may not all be brilliant and there is a naivety to it which could easily be grating. I can also say that I don’t love every scene of this film, for example I could have done without the sequence with the policeman which came off a bit too ‘haha look at the narc’ for my taste. This is definitely a case of me being in a different audience to those in the early 70s, it just does seem as subversive any more in the 2010’s. It’s the characters Ashby wants to shed a light on and not his film-making, which is far from boring but also not a visual feast. Direction is not the be all and end all of great films and I feel this film shows that.

Following on from the slightly dated policeman scene, it is obvious that this film is being made in the wake of the 60s hippy dream failing. Despite the optimism that the 60s brought, all that is left now is the conservative aftermath of that. This is why there is so much contempt for any kind of authority. The biggest laughs in the film come from these authority figure like his war loving uncle despite losing an arm. His mother played with brilliant gusto by Vivian Pickles who just seems to reek of societal compliance, has completely shut off her emotions. She cares not for Harold and his antics and instead busies herself with trying to make Harold ‘normal’.

Despite all this morbid subject matter and depressive view on the world itself, the film promotes being different in a really lovely way. The film is without a doubt sweet in nature. For me, it doesn’t trip over into being sickly because of this darkness. The weirdness only helps me understand the place from which these characters are coming from and heightens the emotional impact of the main characters relationship. I fell in love with Harold and Maude, presumably in the same way generations of people have been before me and long may it continue.

2 thoughts on “Harold and Maude”