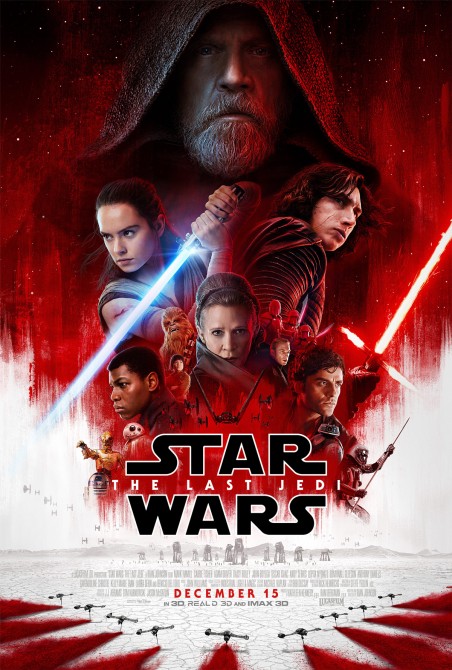 What if this was the last Star Wars film they ever put out? What if some godforsaken anarchy ensued and Disney abandoned the entire franchise, consigning it to some eternal limbo where it was only alive in the memories of those who chose to carry it, or those who discover it some time in the future. If there was eight films in the main saga and never another? What if Star Wars : The Last Jedi (2017, Dir. Rian Johnson) was the last film?

We’ll never have to answer that question, barring some atomic mishap. The behemoth of Star Wars will continue to steamroll its way across our psyche for who knows how long, the way Disney Inc. operates. Star Wars as an idea has been in our collective consciousness since 1977, 40 years since its first reception. It very easily could be around for another 40, 400 if Disney has it their way. Although I don’t like to comment on the meta-context surrounding the film industry, I do find it ironic that Disney’s recent behaviour is something akin to the Empire, and yet their best weapon is selling you the idea that you (and they) are part of the Rebellion. Enough with that then, and lets unlock The Last Jedi.

You can never escape “Star Wars” in the modern world, and this blog is no stranger to it. We did The Force Awakens (2015, Dir. J.J. Abrams) and Rogue One (2016, Dir. Gareth Edwards) respectively, and both writers here hold a special place for this mystical franchise in our hearts. So although I did my best to keep myself out of the hype cycle, I couldn’t help being excited for this one. The Force Awakens held some of the best but also some of the very worst tendencies of the franchise. Star Wars is so big, so beyond any singular vision at this point that its’ really got the room to maneuver around in how different aspects of Star Wars come to the foreground depending on who’s at the helm. So knowing Rian Johnson was there made me excited, unashamedly so, because I’m a big fan of his previous work. If you can’t escape it, at the very least having someone I love to bring it together can definitely inspire hope in me. In short, it’s real cinema magic.

I think the general format I’ve come to work with is discussions of style and substance, and it fucking thrills me to say The Last Jedi is bursting through its seams with both. Quite simply, it’s probably the best Star Wars film to have been made since the original trilogy, and with someone who has less of a monolithic attachment to the those original classics, for me it might be the best Star Wars film ever made. A bold stance, and one that I’m sure any dissenters will be ready to rip to absolute shreds. But my heart says what it believes, and The Last Jedi is a shotgun blast at close range, absolutely overwhelming even if not all of it hits.

Star Wars benefits from no expense being spared, and it just shows in every possible way. It looks breathtaking, it sounds breathtaking. That’s what you get with deep pockets, and my god it’s just continually gorgeous. It’s set designs, character designs and costume are simply a sight to behold. The same can be said of its cinematography (by longtime Johnson collaborator Steve Yedlin) is at moments breathtaking in the sense it was so beautiful I forgot to breathe. It’s sound design absolutely fills your ears, vibrant, resonant and impactful. There’s such a brilliant moment where the noise of the lightsabers fills the space, Kylo’s on one side, a harsh and discordant warped version of the original, and Luke’s vintage sounding shimmer of the his lightsaber. It’s a moment which bridges the legacy of the entire series, all in two different sounds. That is good sound design.

Honestly though, and I mean the least possible disrespect when I say this, but quite simply there was too much riding on this film for it not to look this stylistically strong. By its nature, the behemoth will soak up some incredible talent, and it shines here. Johnson pulls out such aesthetic wizardry inside the Star Wars formula, with a box that can only ever be 12 rated (PG-13 if you’re American), that its impossible not to commend it. But as I said, it’s too big to fail in that department. But one area it really could have fallen apart was in its substance.

Now its no longer chained to its love/hate auteur George Lucas, a Star Wars  film can’t be anything less than dumb and entertaining. What Rian Johnson does then, and what I found to be the same thing in Rogue One was the irrepressible desire to do something more than just make unthinking popcorn entertainment. While I ultimately enjoy Abrams work, it always treads such safe, Spielberg-esque ground. Spielberg was always the safest of the 70s movie brats anyway, which explains why he was such a bankable filmmaker, but ultimately after 30-40 years of exposure to that wholesome American chic, it get unsatisfying. So Johnson flipped the formula on its head, turning The Last Jedi into one of the densest and most narratively complex stories to grace the Star Wars universe. If anything the best analogy to it is found in its games, in the rather clear-cut Knights of the Old Republic and its more morally complex and developed sequel, Knights of the Old Republic 2 : The Sith Lords. One of them lays the basic framework, and the next one chucks everything but the kitchen sink at it to push that framework to its absolute limit.

The Last Jedi’s story is a constant and dizzying juggling act, of fully fleshed out characters each with their own arc of reversals, tests of character and moments of failure. Failure is one of its biggest themes, taking the best lesson from Empire Strikes Back (1980, Dir. Irvin Kershner) and applying it tenfold to a series of characters all unbearably human. This is by far the most existential peak Star Wars has reached in a while, as its characters go up and down the spectrum of good and evil, courage and cowardice, justice and mercy. So much of this is beyond a classic good vs evil narrative, the very origins of what pulled people into the original film, and no character good or bad comes out unscathed. Everyone makes dangerous choices, and it circumvents so much of the “I love it when a plan comes together” brainwashing that mainstream cinema is reliant on.

Honestly there’s so much going on structurally here beyond modern mainstream filmmaking that its hard not to just focus on that. There’s collisions with the stories of the originals and the prequels, there’s hallucinogenic dream sequences, there’s the birth of characters from nothing rather descended from great lineages, it genuinely feels like magic. There’s just so much to watch here, so many stories without relying on overwhelming location changes. Although a fair amount of locations are seen, often they are there for long periods of time, allowing you to adjust and soak in the sense of place before changing tracks again. It’s just…I don’t know what more you could want from a Star Wars film that tried to do something new. It could have rested and coasted on the laurels of cheap nostalgia which infects so much of modern culture (looking at you Ready Player One) but it’s not that.

It’s a film that doesn’t give you easy answers, it’s a film which requires you to keep track of it. It’s a film which contains bold and dazzling aesthetic choices, but also ones which are brimming with thematic resonance and meaning. A cynical person would say its a far more pretentious Star Wars film, but what do you want from this series now? For many its a childhood love they carry into their adulthood, but your childhood doesn’t stay the same. You can’t ever go back. There’s a continual churning out of unchallenging, simple hero journeys, why should we not celebrate films which want to chart new ground? Lucas knew that when he ceded control of the series to Irvin Kershner for Empire and it was because it needed to grow. And not everyone likes growth, but The Last Jedi is an infinitely better and more entertaining film because of its growth, even if it’s not easy.

The Last Jedi is honest to god everything I had hoped for when they said Star Wars was going to be rebooted. It functions as dumb cinema entertainment and clever film art. It’s wearing a mask of crowd pleaser and serious artist at the same time, and thank god its got that because without either side to balance it might be too silly or too serious. But its more than that, it’s a film whose philosophy is one of hard truths and real balance, about how the stories we tell each other are really sometimes stories, no matter how much we want them to be true. And that makes way for the greater truth, the one that maybe we need to construct our own stories rather than rely unquestioningly on the legends of old. There’s a continual struggle between good and bad, that goes beyond any one victory.But the battle between hope and despair is a real one, and its one that takes more than any one hero, be it Luke Skywalker or Rey, to win. It’s the antithesis of The Force Awakens, and in my eyes that’s a very good thing.

And my love/hate saga with Star Wars continues…