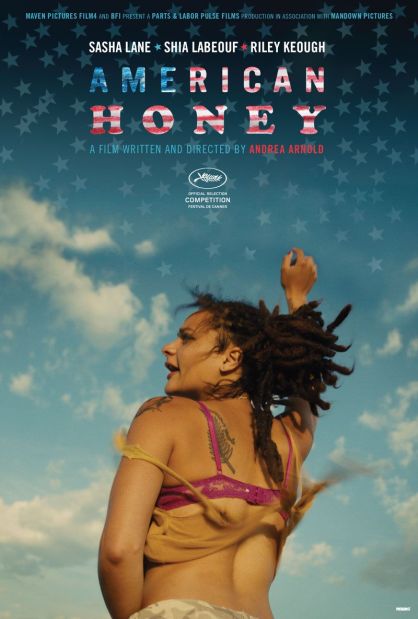 In cinema, you can get away with a lot just watching beautiful people doing things. This isn’t meant to be a slight against American Honey (2016, Dir. Andrea Arnold), just a reminder of some of the implicit things we accept in cinema unconsciously. How would we feel about a lot of characters, a lot of their actions if they weren’t also actors which need to “look good” on-screen. The world of cinema is one edited alongside that society’s standard of beauty, one which reflects it. And as a result, we might lend our investment, our desires and our time to those we deem good-looking. Psychologists chart this example in what’s dubbed “the halo effect”. I guess the question I would ask is, what would this film be like if its two leads were not conventionally attractive?

It’s unlikely we’ll ever find out, so I’ll leave the hypothetical there. Sometimes its good to entertain how a film does what it does, and what the result would be if one its aspects was considerably changed. But also oh well, because what Andrea Arnold has presented us with is more than enough to talk about and reducing any discussion of this film down to the aspect of attractiveness is missing the point. Hard.

One of the biggest pains of poverty is the fact its unrelenting. When a storm comes into view, it may rage and flash wildly over the sky, but sooner or later it’ll pass. Poverty isn’t a storm though, it’s a knife in your side which you grow up with, affecting your every motion, thought, experience. It hangs over your head like a storm cloud chained above you. And so when you’re exposed to the chance to make money, a dream which hopefully leads to you pulling that knife out of your side, you want to grab it with both hands.

So that’s just what Star (Sasha Lane) does, when Jake (Shia LaBoeuf) catches her eye, and she jumps in a van to help sell magazine subscriptions to anyone who’ll buy them. It’s a life of cheap motels, of rough/fun parties with hard edges, and of money which is both real and ghost-like, money which is earned and then either owed or almost immediately spent. And one which seems sweet on one hand, and just about to turn sour on the other.

And so follows a road movie in that classic vein of American films, one which charts a journey through a landscape, rather than through a plot. Star encounters haphazard points and paradoxes of American peoples, traversing through the landscapes of the South while pinballing through its potential dangers. And its this aimless motion, one which moves forward with such urgency even as it explodes into nowhere, which manages to hold your attention for the film’s running time. Star, like Jennifer Lawrence’s “Mother!” holds the centre of the frame for almost the entire films running time, and in that 4:3 aspect ratio, the film functions like a portrait painted a thousand different times. All the while, the marks of experience begin to get scratched into the walls of her mind, good and bad.

The film functions more like a poem than a script, and how much you pull from this hyped up pop-Americana trip is up to how much you’re willing to climb into the back of the magazine van with her, and how much you can vibe with Arnold’s unapologetic youth revolt into nothing. I guess that’s why I brought up the attractive people note earlier, because a lot of this film rides on the young people just being young people wavelength that can get exhausting, even if it’s purposefully so. And what makes American Honey so special in that regard, is taking that oldest cliché of young love and making it feel vibrant and thrilling, even if it doesn’t feel new. Things always feel new for the people on adventures.

So Star rides an endless wave of half thought dreams and dull edged reality, the desire and desperation for a better life keeping her from sinking beneath the Americana sea. And she does this alongside the soundtrack of multiple Americas, the folk country world fused into the current trap/rap game bleeding into radio pop from Rihanna, they all fight for meaning and relevance to her story, and Arnold makes sure that each track pulses alongside the beat of the film, sometimes obviously and sometimes less so. Not everything is meant to be subtle when you’re an 18-year-old, and that fact being captured in the music without becoming overwhelmingly annoying is a difficult tightrope to walk on.

Godamn, it’s just a good film. It does justice to half of the reality and half of the fantasies of youth, ones that we still might carry round with us even as we fade out of it. And what sticks in your mind is its engagement with the darkness of the world without losing its hope. And maybe it’s just me, but I wouldn’t mind riding that wavelength, because giving into the bleakness is when the fun really stops, and the rollercoaster ride actually comes off the tracks.