This is a new blog made anew by me. The writer. Who enjoys writing and cinema enough to do and talk about them simultaneously. 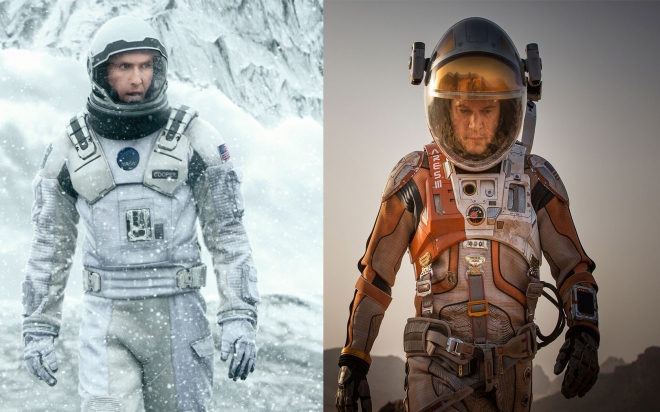 I watched The Martian (2015) in cinemas recently, Ridley Scott’s new directorial effort based on the 2011 novel by Andy Weir. Honestly, it was a good movie. Matt Damon is extremely affable, and honestly its just a pleasing film. It’s watertight in terms of script and character, everything is necessary and explained well, it actually makes you laugh and honestly in terms of technicality its pretty seamless.

For me at least, as I sat in the 2/3 full cinema, I couldn’t help but feel tinged with a bit of bitter-sweetness about the whole affair. The reason for this, is Christopher Nolan’s Interstellar (2014). Interstellar to me, was one of the most affecting movies I’ve seen in a while. Honestly I’m sure the IMAX helped, but the films visual splendor and grandiose themes helped propel me into a state of what felt like extreme consciousness, of hyper-awareness and sensitivity to the profundity of the reality we inhabit.

Now all of that sounds pretentious, and that’s because it is. Pretension is a grappling for higher ideas and themes. The word carries poor contentions because people associate it with snobbery, smugness and elitism, but the very idea of pretension, of reaching for something, is one I widely admire.

The Martian however, is far more scaled back in terms of the vast expanse of space,  exploring the life of what essentially becomes the first hermit on Mars. Consistently tasked with seemingly impossible challenges, Matt Damon’s character consistently and unrelentingly overcomes every obstacle put in his way without hesitation and without doubt. A man is stranded on the Red planet, and everyone bands together to come to his rescue, which promptly arrives. Fin.

Interstellar however, decides instead to pursue the path of most absurd, as it falls into speculative quantum theory, wormholes, time travel, inter-dimensional beings from the fifth dimension who may be humans from the future, visualised string theory and far more difficult to tackle concepts and ideas. As a result, being a far more intricately weaved beast, it has been criticised and picked apart by film reviewers, amateur science enthusiasts, professional scientists, and everyone who has seen 2001 and unleashed their claws the moment anyone made a comparison.

So currently as it stands in the general opinion, Interstellar stands as an overreaching failure while The Martian stands as Ridley Scott’s return to form. But why is this?

Well there’s a few reasons to this, and it is both of the films which are responsible.

The Martian is a relatively small and contained story. Large parts of it are devoted just to Matt Damon explaining a problem, then him working out how to fix the problem, then showing him having fixed it. As a result, the film almost becomes a series of vignettes which could be retitled “How to survive on Mars (feat. Matt Damon)”. In fact its only the returns to Earth which provide an overarching story to the film, as the people there just try and figure out how the hell they’re going to get him back. And the entire film, and every character is devoted to this aim. If Matt Damon was the sun, then every other character orbits him and only exists in relation to him. These streamlined characters  help move the plot along at a nice pace, but come at the expense of actually giving a shit about them. More importantly, it makes each character simple and easy to swallow.

Interstellar however seems to be the antithesis of this. The personal dramas of the film take up the primary role in a film which contains fifth dimensional extra terrestrial  contact. Space ends up playing second fiddle to the characters who inhabit it, and so many of them are independent from the central protagonist, Matthew McConaughey. Rather than being a sun, Each character is their own asteroid hurtling through space, being pulled into various different orbits and trajectories which sometimes cross and sometimes clash with every other person/asteroid. They all have their own aims, and their own thoughts on the same event, in fact rarely is consensus ever achieved in the film. Besides the fact that they agree to go into space, lots of time is devoted to people arguing over the best course of action. A trait The Martian shallowly has, but in reality everything moves along so swiftly that the weight of decisions never really hits with the impact it should.

Jessica Chastain might be the excellent center point here, considering she plays a central supporting role in both films. In The Martian, she’s Matt Damon’s commander, and in Interstellar she’s Cooper’s daughter (Matthew McConaughey’s character). Her troubled relationship permeates most of Interstellar, and her troubled relationship with leaving the astronaut on Mars that permeates most of The Martian, but only one of them feels truly meaningful. The other is just almost a shade of a real conflict, as Jessica Chastain “wrestles” in the least impactful way with leaving Matt Damon behind on Mars. If film is illusion, then its puppets need to be convincing, they need to be Punch and Judy, not  a man with his hand up two backsides making silly voices.

Interstellar is a big film. In every sense of the word. It’s a monolith, each piece of it, from the writing of the film which required screen-writer Jonathan Nolan to study the science behind relativity at Caltech, to the scientific and technological papers published from the making of the film, to the unbelievably layered and constructed score, I mean I know it sounds like I’m over investing in the film, but truly every aspect clicks so well and no shortcuts seem to be noticeable. I mean the sound mixing and editing alone is impeccable. The key here though, is that the more you scale something, the easier it is for the house of cards to collapse.

This is really where The Martian comes into its own. The problems of accretion disks in black holes just don’t exist in the world of this film. As a result its a lot tighter, a lot leaner, and more importantly is never at risk from completely overloading and overpowering your visual and auditory senses, along with your mind’s processing power.It’s ironclad this film, and it’s because of its simplicity. No characters in this are giving the space or necessary reason to spout philosophies at each other, or to be betrayed by someone who experienced a cruel fate in the first place. There isn’t really any room for anything besides just what is happening on-screen and when and how and if Mark Watney will be saved from the red planet.

Here’s the key here. Interstellar is so ambitious, and its scale becomes so gargantuan, that its flaws become gargantuan with it. Plot pin pricks become plot gaping holes, and the central core of the theme becomes a giant presence, which as its reach extends, so too does the audience who can react or reject it. Not everyone will agree on Anne Hathaway’s sentiments on love, or his mixing of the emotional and the rational, or his science which under scrutiny has fallen apart (in particular, the low hanging fruit appears to be the Blight idea which would not occur in reality). Every leap the film makes, leaves a space where people can leave it behind. To go along with the journey is one thing, but to accept or appreciate it or even like it requires something else.The harder you think about things, as human history shows us, the more divided opinion becomes.

Combine this with Nolan’s almost magical status in cinema today, as a man who provides intellectually nourishing mass entertainment. People call him out as overrated, and regardless of whether you agree with that or not, its hard to deny that his films are just cannon fodder for the movie machines. His films if nothing else (and I believe they do a lot more) provoke thought, and provide incredibly engaging visual spectacle. As a result, his films meet an almost maddening level of scrutiny, as critics are finally giving something with so much meat on its bone. A Nolan film may mean many things to you, but it never leaves you with nothing to say. As a result, the “elite” descended from their perches, to dissect and pull it apart and explained to us that it was good, but not really great because x,y and z.

Put this way then, the failures of The Martian’s supporting cast to be really engaging pales in comparison. So what if they aren’t particularly memorable? The story’s about Matt Damon,sorry Mark Watney, and they all need to help him. Oh there wasn’t enough spectacle? Well the film is trying to be far more realistic than other “space operas”. The Martian presents astronaut food on a plate on the moon, while Interstellar presents a buffet which breaks its inter-dimensional table. One is the cinema of spectacle and excess, which has its failures and flaws. The other is the cinema of the technological and the functional, where mechanically the pieces lock into perfect place at the expense of personality.

There’s a point in a Paul Thomas Anderson Q and A  I saw ages ago(which is pretty funny/depressing, considering he looks like he wants to leave the whole time and the mic kept being weird) where he talks about films and flaws and personality. I think cinema is better for both The Martian and Interstellar being in them. But in my corner, I’d take a personal failure over a mechanical victory any day.The Martian is by no means a bad film, and is far easier to watch. But that doesn’t make it better, it just makes it more palatable. And in the age where everyone’s a critic, simplicity sells far better because it offers less room for people to take issue with it.