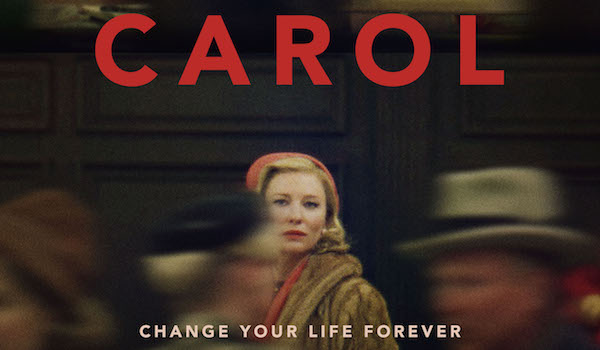 In Carol, there is a scene where Carol yawns. This sums up Carol. Okay I’m sorry, that was a low jab, but that is honestly what I felt during Carol. Seeing what is supposedly a masterpiece of passionate and intimate romance of love against the backdrop of a societal unwilling to care, has all the makings of a fantastical melodrama.
And Todd Haynes, venerated queer filmmaker does the opposite, and instead presents a quiet, subtle tale that sweeps like a delicate application of Carol’s make-up as opposed to the oncoming train of emotions regarding the typical Hollywood melodrama fare.
And good for him, good that this film exists, good that the story exists mostly in its intact form, that it hasn’t been warped, manipulated or butchered behind the screens of imaginary fat cat executives, setting fire to the gorgeous film reels with their cigars. This film is a very clear, very honest and earnest artistic endeavour. It is also quite honestly, crucifying dull.
There’s been so much talk about this film. The most recent edition of Little White Lies had Carol for its cover story. It seemed to enrapture almost every film critic around. The fact it has been ‘snubbed’ for a nomination of Best Picture at the Oscars is a cause for thinkpieces abound, as to whether the Academy is intent on just hating gay people. Forever. I’m very hesitant to wade into these waters, because once you start to mix politics of this kind into this, it becomes a messy fight about what Carol represents rather than what Carol is.
And just what precisely is Carol? A love story, a critique on societal pressures? A crime story? All three? Yes and more, but it all just sails by in one long cruise ship of a film (I’ve used a lot of metaphors, I apologise), which there is just surprisingly little to talk about or even consider. By wearing its heart on its sleeve, or rather its entire shirt, it ends up being mostly surface.
SURFACE
Well let us start with the surface. The supposedly lush cinematography, which was pushed into my skull since I sat in the second row of the cinema, is…well its fine. It doesn’t really do anything besides underscore the performances, which is fine, Steve Jobs| did that and it worked well. Everything is in soft light, and it all functions well. Everything is too dimly lit to ever drive home the emphasis of the soft light, nothing really looks warm or intimate, so much as everything looks lukewarm.
The music is a terror, a blundering, vomiting drunk in a civilised party. It is discordant, and not in an intentional way, just in a jarring, painfully suspense breaking way. All the tracks come down with the blow of a hammer, even the subtle tracks. The film doesn’t exude enough life to justify its score, filled with supposedly swelling emotions. Like the couple who realised they had come to the wrong screen, the music actually walked straight into the wrong film.
Also the film has an uncomfortably stagey feel anytime Carol and Therese aren’t just the two of them. This I’d bet was a design choice, but nevertheless lends the film a frustratingly phoney feel, a feeling of  faux authenticity, which helps to kick every character while they’re down (dealing with the slow/boring script) just to help elevate Carol and Therese, to peacock them in front of us to show us just how special they are.
The costumes were nice, and the set design was. But Crimson Peak had absolutely gorgeous set and costume design and no one batted an eyelid. Nothing to write home about, just borderline functional, with yes, enough style to be appreciated. Good on them.
UNDER THE CELLULOID SEA
Okay, the performances. My company at the film were far more crushing of Rooney Mara than I. I thought Rooney Mara was fine, childish whilst only being really annoying in small doses. All of the supposed ‘stolen glances’ and ‘quick loving looks’ as these two circle each other rapidly lose their effect, as what actually happens is two people who don’t inspire any feeling whatsoever apparently begin to feel. Cate Blanchett on the other hand, given the most meat (in that the fact the film circles her like a maelstrom center), give a good performance. She’s just good enough in the role to be believable. And that’s a testament to her acting abilities. My favourite was Kyle Chandler, the sidelined (and I guess rightly so for the context of the story) husband of Carol who is essentially a bitter divorcee. Props to him for not overplaying his role.
However the performances, all of them (bar one scene which I will get to) are dead. I’m watching fish float at the top of a barrel. Everyone in this film is so bitterly repressed, so closed off, that it helps to illustrate one of the key faults of the movie. That a story such as this, cannot survive the transfer from internalised reading to external visualising.
This is not just the actors fault. The script, is a turgid and dare I bloody well say it in this day and age, bourgeois nonsense fantasy. It assumes such a grandiose self-importance, that the film never earns or makes up for that leap. Nothing in the film is as interesting as it ponders itself to be. Therese is ultimately a drab, shy woman buffeted by every wind around her. Therese could at this point literally be hit by a newspaper blown down the street and follow that for 2 hours. The same effect would occur. Watching someone be purely reactive can be excruciating to watch, but done well it can produce a truly elating piece of work.

The Apartment is this film. When we watch a film, we want people to be proactive as well as reactive, otherwise we can become frustrated with their lack of action in the fictional world. Jack Lemmon in this is excruciatingly reactive, always being nice at the expense of having a backbone, and its hard to watch at some point because he’s so flimsy. But the catharsis comes when he finally does make that stand. And so the film gives way to melodrama, the release of emotions over realistic portrayals. But so goddamn what, film is not real life. It’s not a place which has to conform to realism, in fact every piece of art has that some right  Carol on the other hand, is not a melodrama. And so it doesn’t appeal to our emotions. But it does, because it’s about passion and insecure love. Or is it?
THE BRINY DEPTHS
This film. No, this story, is where the issue lies. I have not read The Price Of Salt, so I can’t speak for the book, but my god this story. Obviously it’s captured the attentions of many, and I will only cautiously venture into the possibility of the film taking in a hell of a lot of ‘culturally enriched’ middle class artsy types who’s tastes and declarations of love for this film say more about them than the film. But look what’s at the heart of this story. The love story between two women, and the fight between reality and the intimate world of their relationship.
And I’m sorry, but who cares. Therese is a walking stone. Trying to relate to her is like trying to relate to water in a cup. Carol and every other character in this world, is just as lifeless. Because everything is repressed, nothing lives, not even this supposed romance. The only flicker of life, is when Carol and Therese kiss. The film comes alive with the potential it could have had. Their relationship isn’t particularly intense, their bodies don’t communicate the chemistry of people even attracted to each other, Therese gets heartbroken and I couldn’t care less. Carol gives up her child and I feel bad for her child. They don’t gain anything by being selfish, the love the have is as listless and beige as the colour scheme which permeates. Even in a land of repression, love can’t sustain anything, beyond a slight flicker.  But that’s not true, 1984 (once again the book, not the film) managed to convey the fierce rebellion of love in a repressed world. So if Carol is devoid of melodrama, it becomes a piece on love where love isn’t particularly important or more importantly…IT DOESN’T MATTER.
Nothing matters in this world. Characters, events, the inter-relational conflicts going on, none of it seems to matter, besides the relationship between Carol and her husband. It has a tangible effect on the world. But nothing else. Everything is inner turmoil. And you know what, inner turmoil is not the strongest trick of cinema! In a medium relying on sight and aural sensations, inner turmoil is incredibly difficult to convey, and even harder to make engaging. Which is why it often isn’t tried! There’s an entire medium, in fact one of the oldest that does that much better. Writing. The original form of this story. There will be a lot of arguments about how the meta political context of this will be the reason why Carol will never gain its supposedly deserved recognition. All of those can be put to bed, because it’s just not interesting. It’s not an interesting world, and it’s not an interesting film.
Todd Haynes’ Carol, in my eyes, is a disaster. It’s story is already dull and myopic in the world of film. It asks you to stop and care for this world, this supposedly precious tiny diamond, when in fact upon closer inspection reveals itself to be a lump of coal. It has nothing to say while pretending to say so much. Therese ends up with Carol at the end so its happy? Who fucking cares, when the entire fictional construct is not engaging.? I understand, and respect the intentions behind this film, but I fundamentally disagree with it on almost every level of its existence. I’m glad it’s out there, but I’ll only defend it if I have to defend the medium of film itself. Otherwise, it can fade quietly into film history.
In short, not my cup of tea.
-Alex