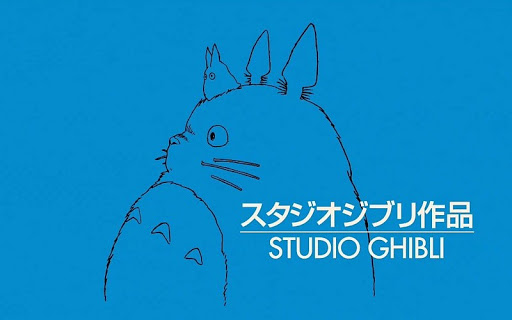 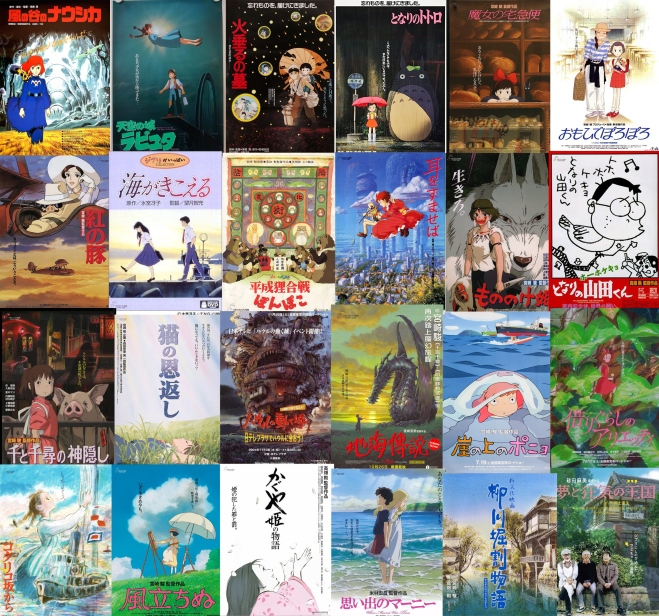 “What you show in a movie is one hundred per cent of the reality that you impose on the audience. They cannot imagine anything else, so you have to balance everything.”

This is a quote from Mathieu Kassovitz, being interviewed about his seminal 1995 film La Haine in the latest edition of Sight and Sound (May 2020). He was making a point about the characters in his film, but the quote stuck with me as I made my way through the entirety of Studio Ghibli’s feature filmography, alongside three significant documentary releases related to the studio (these are Isao Takahata’s The Story of Yanagawa’s Canals, Mami Sunada’s The Kingdom of Dreams and Madness and Akira Miki & Hidekazu Sato’s Isao Takahata and His Tale of Princess Kaguya).

Animation is an art form which demands a surrender to it, both in it’s making and it’s reception. There is a single scene in Pom Poko (1993, Dir. Isao Takahata) where the tanuki/raccoon-dogs are watching the television, and some tempura prawns are dropped into a frying pan. This is the only moment in their fictional works which is a scene captured from real life. Every other frame, every other character, every other motion and movement and atmosphere and tone, is a created work of animation, be it hand-drawn or computer generated. The realities of these works are ones which have sprung to life from drawings, designed by a small army of artists over several decades. They have animated life into these frames, into these scenes, into these stories. They have asked you to surrender to worlds which are vividly not real, and often delightfully surreal. The works are not constrained by the limitations of the physical world around them; every image is malleable and designed in a way few directors and designers could ever have control over.

So when you can have anything to show, what do you see?

Of course, infinite possibilities do not make a film. It is the very narrowing and precise decision making which leads to these sculpted pieces of artwork. To fashion a world, a place, a story out of thousands of blank pages and frames with no lead shed, no ink spilt on them. Studio Ghibli’s roots are firmly grown in Japanese soil, in an industry which uniquely supports the release of animated entertainment in which is allowed a much greater tonal range of emotional and intellectual maturity. It’s founders, Hayao Miyazaki and Isao Takahata (alongside producer Toshio Suzuki) had already been long at work in Japan’s animation industry before the studio’s creation. Both had intertwined, maturing careers and both were becoming grounded in the artistic visions they were looking to express through their work.

With Nausicaa of the Valley of the Wind (1984, Dir. Hayao Miyazaki), the groundwork and more importantly the financial capital existed to create the studio itself. The ideas then developed from the funding, alongside significant (and stressful) delays of Takahata’s documentary mentioned above, before Castle in the Sky (1985, Dir. Miyazaki) became the first official release of the company to save Miyazaki from going bankrupt. What would then follow would be a path which continues to stretch forward today as Miyazaki continues to work on a new film (scheduled for release in the coming years), twisting and winding through some of the most breath-taking animation ever put forth into cinema. Throughout the scenes in Sunada’s loving documentary, all three founders express their understanding in how the others shaped this future they drew up together, how this studio which came to define their artistic legacies has been caught in the feedback loops of each other’s impressions on one another, and their impossible imaginations. 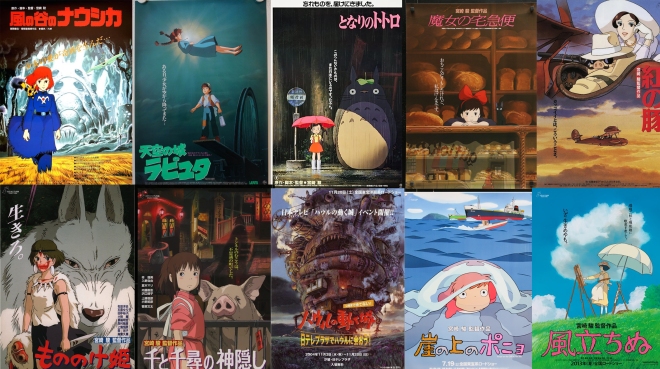 It is easy to mythologise the Ghibli story, especially as their creativity swirls with abandon through the threads of each and every work. At least to the outside world, what spins at its’ phantasmagorical core is the works of Hayao Miyazaki, perhaps the most recognisable face aside from Totoro associated with the company. Here lies a backbone of dazzling and fantastical animation, of invented worlds dripping with cel-animated detail. The characters are filled with a sense of dynamism in their environments, often enhanced by the intricate and elaborate vehicles they use to get around.

True, most of these vehicles are aerial in nature, and Miyazaki spends a great amount of time and care detailing the fluid motions of characters cutting, gliding and arcing through brilliant blue skies. From Nausicaa’s sleek glider to the WWII-esque planes of Porco Rosso to the dazzling flight of Haku the dragon in Spirited Away, the image and pursuit of flight courses through the skies of his works. But the animated motion spills all over the earth too; in the castle jankily grumbling along in Howl’s Moving Castle to the little put-put of Sosuke’s toy boat in Ponyo, there is a respect and richness in depicting the ways characters move from place to place. Filtering anything from action set-pieces to deep meditative reflections on the nature of flight à la The Wind Rises, the magic of movement and motion drives through the frames. Miyazaki has even said himself, what is animation without movement?

But there is also a stunning array of characters which move through his pieces, creating the movement and motion of fiction. Characters caught in deep, torn rifts in their societies like Nausicaa and Ashitaka in Princess Mononoke, characters which strive to ride the currents of war into a better future for us all, even as they shoulder the psychological and physical sacrifices which come with it. We have characters wrapped in innocence unravelling into worlds which create external dangers and internal existential anxieties. Chihiro must navigate a bizarre and serpentine spirit-space in Spirited Away, rapidly coming to terms with a dream world with a dream logic.

In more muted ways, Miyazaki explores the lingering edges of adult life. In Porco Rosso, the melancholy ghosts of love, war and existence lurk beneath a shiny, more playful surface. In Kiki’s Delivery Service, Kiki’s witch powers vanish in a period of absence which sends her into a deep inward and existential crisis, as the abilities which helped defined her are no longer there to support her, to give her definition and meaning to her own self. Even the relatively innocent world of My Neighbor Totoro lurks the very real dangers of any child exploring unmonitored by the secure eyes of adults, it’s frames filled with an emotional resonance and care that few films ask us to entertain. And while his films are renowned for their rich and three-dimensional female protagonists, his curious grab bag of reluctant and sometimes haunted dreamers, boyish adventurers and staunch idealists fills his male characters with a depth and sensitivity which remains in some way uniquely his.

Regardless of gender, his worlds and their inhabitants navigate spaces rich in dynamic motion, waves of ideas crashing against the boundaries of the screen like Ponyo running on the cascading tsunami. The worlds of his films stretch and expand to accommodate multi-layered landscapes overflowing with layers of tone and atmosphere. In Princess Mononoke, Irontown is given a range of scenes to flesh out and enrich its inhabitants and their position in the world, with ethical complications only enhancing the moral tone of the film, not diminishing it. Or on a structural level, Howl’s castle becomes a shifting magic box throughout the film, the space and the body continually reinventing itself inside and out. It entertains the viewer through lively animation but it possesses an emotional growth as well, as the castle which has been Sophie’s home (and ours) evolves, rises and disintegrates with time. If anything, the spaces of Miyazaki’s films are navigated by adventurous and complicated explorers, brimming with the tensions of childlike innocence against the knife-like edges of an adult world cutting through the mist.

Miyazaki’s visions of the world have come to define the public perception of a business and artistic endeavour which was not always destined to succeed. The working ethos mentioned had always been “If this one succeeds, we’ll make another one. If it sinks, we’ll just close down.” The production of the some 144,000 frames and additional work of Princess Mononoke in 1997 was the most expensive anime feature production ever at that time, and it would have sent the studio into ruin if it had not succeeded, and was nearly the end of Miyazaki’s career after he announced his decision to retire after its’ release (he did not). This was some 12 years after the studio was founded, and here they still are on a knife edge of a nexus between artistic vision, cultural impact and financial concerns. Miyazaki’s work runs a gauntlet of visceral and illuminating tonal ranges. His unbridled joy, his deep rooted pessimism, his harmonious connection to nature and his troubled connection to humankind.

To try and truly sum up what makes his work so rich and vibrant is a fool’s errand. His work is a visual forest, filled with colossal trees of emotion and soaring aerial displays of character, motion, the lifeblood of animation. Perhaps you might get lost in this forest. Perhaps you might find what you were looking for.