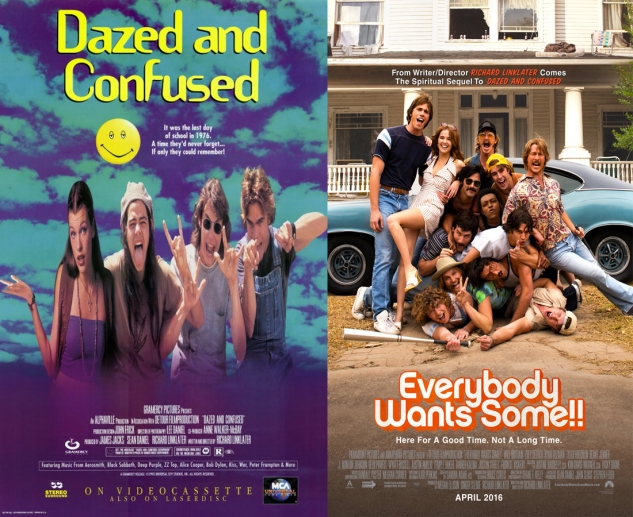 Being young is difficult. It’s not as difficult as being an adult, but it is still a difficult rite in its own ways, plus its a hell of a lot of fun growing up. As I have just passed the finish lines on my teens (hello 20) it’s both apt and odd that I should find an interest in these films now. Apt because they are perhaps the more authentic remembering of teenage hood/early adulthood, with much less of the misty eyed nostalgia masking the awkward pains and truths found in the time, because when you’re growing up, you’re not always growing up. Mainly in any direction you find yourself flying in And its odd, because well, I’m just about out of the Dazed and Confused era equivalent in the UK, and just about to enter the Everybody Wants Some!! era which is the equivalent here in university, and waiting in the limbo between, it’s odd watching Linklater cover the same track of time, 23 years apart (Dazed And Confused released in 1993, Everybody Wants Some!! in 2016).

Anyway enough about me, let’s talk about films.

Dazed and Confused is a film made in 1993 about 1976. About May 1976. About the last day of school at Lee High School in May 1976, and what the kids are trying to get up to on their last day of school. It features a very large ensemble cast, containing some names which would rise to prominence, mainly Matthew McConaughey who stars in an iconic role, and Ben Affleck. But the film is not about any one star, so I should adopt the same mentality. The film follows characters across the whole social strata of the high school spectrum, from sports jocks to poker playing intellectuals, from angry seniors and hazed freshmen to faux greasers and far too real stoners. It’s a testament to the far more real truth of teenage life, as the sectioned off tribalism people often assign to young people (here are the goths, here are the jocks, here are the nerds…) actually ends up seguing into a blend and mish mash of people who come together, interlocking at different points and exiting in different and random trajectories, but still for a short time, together.

The film springs affection towards everyone involved, bar Ben Affleck’s sadistic O’Bannion, but even then he’s portrayed with an amusement rather than a terrifying danger. It’s drama is both low-key and extremely natural. The artificial dramas which say, permeate a film like Mean Girls, are completely absent here. The bonds of friendship aren’t elevated to a melodrama, but allowed to flow and segue into one another. Alliances and enemies are formed, but never with malicious motives or intent. The freshmen are condemned to be paddled because…well they’re freshmen. Mitch (Wiley Wiggins), the young weedy freshmen who we follow is offered a token a friendship from Randy, our resident cool guy who’s friends with everyone, because there’s no need to be a dick all the time. The party that was supposed to happen just kind of forms in a different place, and hell they’d manage to entertain themselves somehow if it didn’t. After all, they just wanna have a good time.

Interestingly, I read the script alongside the film, and there are a hell of a lot of marked differences. The script spends far more time with the intellectuals/poker players, and is far more idea-dialogue heavy. It touches on low-key racism due to Vietnam, race relations, slagging off Nixon, and all the kind of stuff that is not hard to imagine that Richard Linklater heard when he was in high school, but exactly the kind of substance to make producers sweat and editors cut. It’s not the most relevant point, but it was very interesting to see how the power of removing content from the film both narrows its focus (so the film becomes mainly a quest for just having a good time and being youthful) and also cuts away part of the experience of youth (notorious for being highly incensed, being exposed to the undersides of politics for the first time, and being mouthy about shit you believe in).

So where Dazed And Confused starts with an ending, Everybody Wants Some!! ends with a beginning.

I haven’t much experience with Linklater’s work outside these two (School Of Rock), but it is both a spiritual successor to Dazed And Confused and according to Linklater, a sequel to his hit Boyhood.

Everybody Wants Some!! follows Jake (Blake Jenner), a freshman at college on a baseball scholarship, and getting to grips with his new cohorts in their state provided house, who are a colourful cast of sports jocks, all beer, babes and baseball. I’m just going to talk about the film on its own here, as comparisons are down below.  It again has that same loose, free-wheeling structure following Jake on the weekend before class starts. It’s very much concerned with identity, as the new environment, people and cultural camouflaging they do to get laid, with them taking on disco and country western personas in the same night, before getting roped into a punk concert, leads to Jake having a full on identity crisis, still in a very low-key, enjoyable way.

But everybody involved is performing, bigging themselves up and putting on facades to present to try to entice…well anyone who’ll listen. There’s no real bad person involved, no antagonists or mortal enemies, just people navigating people. They are bonded by their similar tribal desires, to be the best in everything, games, sport, women. It’s what causes the conflict and camaraderie. If you can’t get on board with their aims and their ideas, then you’ll not like them. And while their politics is not PC (I heard a lot of swirling noise going on about the gender politics of the film is rather old-fashioned), their intentions aren’t malicious. They’re just guys who are confident in the traditional masculine role.

That said, the limitations imposed by following a group of frat boys very closely are real. If you don’t like them, then two hours of them being themselves is going to be nothing but aggravating, so be forewarned. But its a film filled with joy, nervousness and sadness mingled in its core.

Perhaps the most important point is that not only does Linklater de-romanticise teenage hood, and make it far better for doing so, he also refuses to conform to a certain bias in portraying high school students. There are grounds for a relationship between the kids who were bullied in high school and the kids who would write movies. Especially since the 80s (call it the Spielberg effect, considering he was a massive nerd and outcast in the bunch of filmmakers he called friends, all those mental New Hollywood lot), the nerdy kids become the hero, the dungeon and dragon players who become the heroes of their own fantasies. They are the victims of the slack-jawed dumb jocks, the bullies who exist to make their lives miserable.

Linklater, who did not experience life in that way, doesn’t lie to us. The closest thing to ciphers or lead characters are both sports stars who are both intelligent, something akin to a mirror of his own personal experience. He was a starting quarterback, like Randy Pink in Dazed And Confused, and he went to college on a baseball scholarship like Jake in Everybody Wants Some!!. And so we get a view from the top of the pyramid, and a refusal to conform to that idea of dumb sport blockheads which permeates American film culture. Sure the bad apples exist, but the bad apples are their own entities. They’re not trying to escape, they’re trying to grab as much as they can from the real world.

There’s also a thin line of pain that runs deep in both films. Both films feature a singular character who is borderline sad and desperate, simply because they’re old. They display exactly the same characteristics of the youngers, but their very imitation is what makes them sad. In Dazed and Confused the character is Wooderson (Matthew McConaughey), who is venerated because he’s an older guy, but is rapidly on his way out, when age is no longer treated as a good status. He’s stuck in high school mode but he’s already out. In Everybody Wants Some!! its Willoughby (Wyatt Russell), a hardcore stoner who is dropped from the team and the college mid story when its found out he’s actually 30, and goes from college to college faking his records so he can continue living the student life. If there’s one thing more difficult than being young, its being old wishing you were still young.

It’s like the young people exist in this fragile glass cage, and before you know it will be pushed out into the big wide world. And then there are people who watch from the outside, desperately trying to seek (in vain) some way back in. And you obtain both a mixture of pleasure and pain watching them, because you miss it while simultaneously being glad it’s over, and are either taking part vicariously in their joy or suppressing your pain in wishing you had the chance to do it over again. Or perhaps both.

But for every moment of pain, there’s a moment of happiness created too. And they’re not big dramatic peaks, filled with the highest drama, they’re embracing the small comforts and the thrill of hanging out. Tiny moments which add up to friendships and experiences you recount 20 years later and laugh to yourself about. By removing the melodrama all that’s left is the real drama of living, and the authenticity of the teens, mawkish and stumbling as it may be, is revealed. So too does it allow the audience to connect in a much richer level, which may explain why Dazed And Confused has taken such an iconic place in cinema history. Because the worlds aren’t inhabited by grand heroes, damsels in distress or monstrous villains, and most of us will never come into contact with anything resembling that. Fantasy plays on our ideals and dreams, but Linklater just stylises and compacts reality in an affectionate way, and so suddenly we can empathise and relate in a much more intimate way because the mirror looks so much like us, not just who we imagine ourselves to be.

If you didn’t care for any of this, at least acknowledge this: the spirit of Dazed And Confused is alive and well in Everybody Wants Some!!, and the spirit of Richard Linklater is one which you can smile along with, because life is rough, and we all just want to have a good time.

I’ll leave you with this excerpt from an interview by comedian Marc Maron:

(P.S, there’s a scene in Everybody Wants Some!! where Jake recites some Camus indirectly, about the myth of Sisyphus and baseball, and its the most teenage thing ever.)