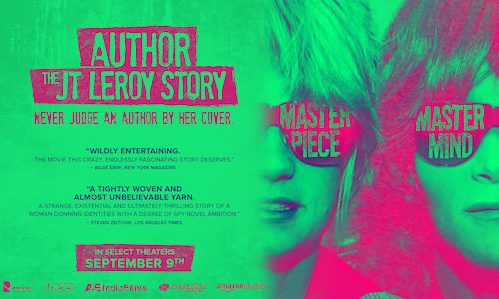 Disclaimer: Before watching this film, I had never heard of anything pertaining to the JT Leroy Saga. I have never read any of JT Leroy’s works, nor any of the literature surrounding this literary scandal.

So with that out-of-the-way, and all attempts at establishing any credibility in being an expert on this matter scribbled out, let’s move on as to just what the hell is going on here.

I shall not reveal the whole eclectic saga, that was director Jeff Feuerzeig’s job in making this film. In short, Laura Albert, a woman, invented or channeled a persona into her being, that of one Jeremy ‘Terminator’ LeRoy, an abused boy who had endured prostitution, drug addiction, AIDS, a sex change (which is explained later) and vagrancy.She then wrote from this persona’s perspective, and became wildly well-known, courting fame and time in the spotlight for the searing, brutally honest fiction that was being written.

All this without a body, and without being real. Because JT Leroy didn’t exist, at least not as a physical presence on this earth. So Laura Albert recruited her sister-in-law, Savannah Knoop to play JT Leroy. And it worked, from 1998 to 2005, JT Leroy was a real construct who swooshed around the celebrity and publishing world, accompanied by Albert in another persona she had created alongside the real Terminator story, a British woman named Speedie, and her boyfriend Astor (who was really her husband, Geoffrey Knoop).

Make no mistake though, the house of cards is not truly laid out here. That’s not to denigrate the film, it’s just that the film is doing a very different kind of thing that a regular documentary might angle for. This is not an investigation, this is Laura Albert’s confession, her account of it all. It is a serious unraveling of her perspective of how it all went down, the puppet master behind the board locked into an unceasing performance. The supporting cast of this film circle tangentially at best, only their to provide light context and not much more. And that’s okay, the film is delving into the mind of Laura Albert, a mind which spawned JT LeRoy.

And there’s a lot to it. Drama and betrayals, affairs and desperation, the truth and the lies becoming so indistinct that you should be riveted by it. But of course, that depends on your point of view. If that seems vague, I’ll put it another way. Half of the importance of the story is simply because she’s not just deceiving regular people, but because she’s deceiving celebrities. Laura actually tells us at one point, that she knows she’s made it when she illustrates the ‘Bono’ talk that Savannah as JT got from you guessed it, Kings Of Cool, Bono from U2.

Cool is always nebulous, and always notorious to pin down, very subjective. But the anti-U2 sentiment is fierce among people my age, and I can’t ever remember a time when anyone even remotely discussed Bono as cool who wasn’t over 30. Bono, for anyone who even vaguely pays attention, represents the shallowest of cools. He’s probably a top bloke, but U2 have never been anywhere near the cutting edge of cool, and belong somewhere along the great “Stadium Fillers” genre.

I mean, U2 diatribe aside, the credence given to Laura’s story rests on the fact that the elite incestuous celebrity circles welcomed her, and the fact that she suffered great trauma in her life. The second bit is very valuable, but the first bit is basically a very indulgent walk with all these famous people who really like JT LeRoy, and how cool it was that all these cool people liked her. And the deception runs deep. Albert would make (and record) all calls she made as JT, so she’d live vicariously through Savannah, as Savannah would have these experiences with the cool-illuminati, an affair with Asia Argento, chatting with Gus Van Sant, ambiguous happenings with actor Michael Pitt, and much more, Laura would chat as JT to them.

And you know…cool I guess? Like it just doesn’t really move me much. It’s like her actions are meant to be far more grandiose because she’s deceiving celebrities. And that only works if you buy into celebrities being better than other people. Which I do not. We’d all like to live that fantasy, of well-known, very successful people telling us that they love us, our work, our personality, ourselves, I understand it, and I understand what drives that. But her actually getting to live out her fantasy is not something that can really be enjoyed, maybe only by her and the conspirators involved. Because you can’t live vicariously through Laura Albert, because you know she’s lying. It’s so far removed that all you can do is watch the journey slowly unfold passively.

I’m rambling here but bear with me. The title talks about the ‘Truths’ in this film. Camus says in his seminal work The Myth Of Sisyphus “In psychology as well as logic, there are truths but no truth.” He’s referring to the inability to perceive the whole world from all sides, so we can’t really know the details we’re working with. The same can be applied here. We can never really know the whole story, because the whole story depends on multiple people, with internal dialogues and psychologies, that we can never really draw the boundaries in it between what’s true and what isn’t. Albert specifically denies that it was a fake, because LeRoy is real to her. In fact she states that she suffers from DID (Dissociative Identity Disorder, formerly known as Multiple Personality Disorder.

This is the stuff I find much more interesting. The reveal of JT LeRoy’s ‘hoax’ is really interested, because the reaction to it was so damning. People implicitly believe that what they see or read or listen to is true. You have to, its logically ruinous to assume everything is a lie. There could be no truth if everyone was lying. And people took it for granted, but they were also so willing to believe the story, so desperate to accept her truth, because even though the books are published as fiction, we always assume that fiction is molded from the human channeling the world around them, and when stories are told with such uncompromising brutality, when they involve such hard times of human suffering, when those trapped in ivory towers see such earnest hardship, they marvel at it. They marvel at the human audacity to take good from the bad no matter how rough it might get. Especially those who are protected from it.

I feel like the film is both too long and too short. Or maybe its just focused on the thing I don’t find interesting. The film seems to wrestle with two tracks, the track of recounting the whole sordid affair, as a train of well-known faces walk through, their intimate conversations of real life played in voyeuristic scenes where tapes roll, and the other track which revolves around authenticity, authorship, and the blurred lines between fiction and fact, and truth and lies. because the best lies are inspired by the truth, but the truth does its best to expose lies. Laura Albert suffered, and she channeled it, however indirectly into her writing. And even if she didn’t suffer, she had the capability to imagine and create it. But the thing people seem to get upset about is her creation spilled over into reality, and somehow people were deceived by that. Well art influences life and vice versa, and Laura just took it to an extreme. Her whole life became a performance.

Which is both brilliant and horrible. Because I don’t think she can stop. And with a film of the whole story in the works, it looks like the sharks desperately seeking salacious stories won’t either. A maddening cycle of trash. Waiting for someone honest to come along.

The only thing for me to do is to just shrug and move on. It’s not all that interesting anyways. It kind of fucked me off if I’m honest.