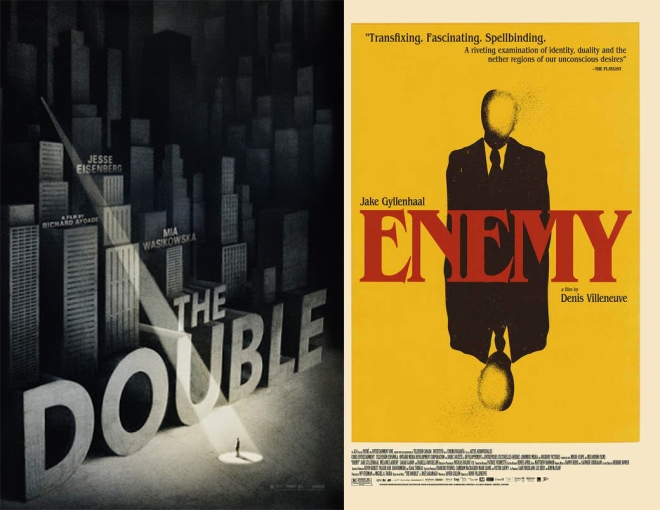 Its difficult to keep track of all the fragments of your personality. The older you get and the more experience you accrue, it all eventually mounts up; like layers of discarded masks picked up as and when you need them. It’s easy to see a unified version of yourself at a glance, all contained inside your fleshy shell. You can look in the mirror and see who you are now, take it all in and keep your memories like photographs, clothes in a closet that you never wear again but still live there.

It makes sense then, that fiction is used as an avenue to explore something interesting: yourself. Or rather, fiction can manifest those sides of your personality that you no longer have access to, the sides you keep desperately repressed, the sides that lurk just out of your vision waiting for the chance to become a reality. The masks slip and tumble off our faces, first a grin and then a grimace. Our personalities can be frankensteined collages of the faces we’ve worn and will come to wear, and it’s this subject which swirls at the core of both Enemy (2013, Dir. Denis Villeneuve) and The Double (2013, Dir. Richard Ayoade).

The churning dark currents of our identities, when they’re acrobatically examined by the lens of fiction, what do they reveal?

Enemy has the tone of an opium dream. Silent, brief moments of clarity punctuate a strung out rhythm of asymmetric beats and scenes. Jake Gyllenhaal plays Adam Bell, a man who upon watching a rented film, discovers and tracks down a man who looks just like him, Anthony Claire (played by Jake Gyllenhaal). The two men are identical in looks, but their personalities are apart. The morbid curiosity to stare into the eyes of someone who looks as you do propels Adam into an entanglement with a mirrored image which acts independently of your whims, your movements. The film unfolds in jagged, mellow, spiralling bends as their lives start to entangle. Anthony forces Adam to give him a romantic getaway with his girlfriend, looking into eyes which look exactly the same while they demand something different.

Except the opium dream seems to disentegrate through your fingers. Adam’s dreams themselves start to blur into his waking reality, and the nature of the divided men begins to collapse in on itself. The two self’s of the film distort into a more subterreanean realm, that of the fractured mind of a singular person. As the film’s legs begin to stretch over your mind, you are guided towards the understanding of how Adam and Anthony are the identity of a singular man over time, that is being warped into the framework of two separate figures. The film, like a klein bottle, holds both possibilities in it’s construction of the external nature of the two of them, and the internal nature of the two men merely being two different masks that have been slipped on and off in time.

The story, boiling away with intensity, spills over the top, oil-slick and messy and staining your understanding of what’s happening. Literally and symbolically, Adam/Anthony’s greatest enemy’s are themselves/is himself. His changing and splintering identity becomes divorced from merely an internal voice in his head, it becomes a real conflict which pushes and punishes himself through the brief window into his life we can see. It feels almost delirious, as the web keeps spinning around all the characters involved in the film, the hollow yellows of the film’s cinematography keeping you company as this shifting mass of identity conflicts churns mysteriously at the film’s heart.

Enemy’s answers to navigating identity are like magic tricks which are never explained, their secrets unknown and left to silence. The film’s nature finally collapses into a merging of it all, the fictions and the realities of the world are one and the same, and the mysterious entanglements of the web spun around you prevent you from ever being able to separate which is which. The divided self here merges into all that it can be, a unified discord of chaos.

The Double has the tone of a fever dream. Relentless and spiky stacatto rhythms drill into the world around you, only rarely giving way to moments of quiet, gentle melancholy. Jesse Eisenberg plays Simon James, a quiet and nearly anonymous employee at a dystopian data processing centre, who one day is confronted with his doppelganger (and brand new employee), James Simon. The two men are identical in looks, but their personalities are apart. James is a shadow version of Simon, a Machiavellian reimagining of Simon’s meek and long-suffering existence. His mirror image (acting independently) can only exacerbate the deep-rooted insecurities and foibles lurking in Simon’s head and heart, and the amoral heart which drives James forwards soon turns towards more sour ends. The serrated cuts they make to each other lives start to bleed, and their entanglement quickly becomes a fight of moral and mortal proportions.

The fever dream never breaks.  The doppelganger is externalised fully, not a folding web of intricate identity fragments, but is a shadow version of Simon made whole. The world is indifferent to his plight. The curiosity of looking into the eyes of someone who resembles you so closely is paired with the wretched agony that no-one seems to care. Simon screams “He stole my face!”, a mask picked up by a different person, one who can be you “better” than you can. The horror is different here, because the internal identity is never questioned by Simon himself. This isn’t a matter of collecting up the salvageable pieces of who we are over time, the things we couldn’t imagine we might ever do and where our identities might take us next. Simon’s matter is that his identity is wretchedly irrelevant to the world around him, and it’s hostility is so great that he must take it upon himself to affirm it or die.

Having a double becomes a matter of cold, calculating rage, a furor which erupts only after every ounce of strength has been spent repressing it. Literally and symbolically, Simon’s greatest enemy is a version of himself which seems to have sprung from the swamps of his own unconscious, an enemy which could know him only as well as he knows himself (if not more). His doppelganger haunts him because he can expose bare how much the circumstances of Simon’s identity are not fixed by some magic framework, but they are in flux; changeable. He exposes that Simon’s identity is more of a construct than he would ever like to admit, a bitter pill to swallow which becomes unbearable. The self becomes divided to a point where it cannot be reconciled, and the shades of identity must murder one another or go mad.

The Double’s answers to navigating the murky seas of identity, are like magic tricks which are explained. The dream-like excitement and curiosity gives way to a colder, more brutal reality of sleight of hand, of deception; of being fooled. The web being weaved around Simon is not one of fog-like entrancement, of a world that cannot be known. The world becomes increasingly exact, increasingly clear about where it stands on Simon. It’s indifference only grows in focus as the story runs its course. The film’s nature doesn’t collapse in on itself, it unfolds methodically to a confrontation with itself, and requires nothing more than to kill or be killed. The divided self here separates into all that it can be: a manifestation of our own personal chaos, unified only by death.

Enemy and The Double both spin on a similar axis: a confrontation with a doppelganger, a person who looks like you. Exactly like you. They both explore what it might look like to confront yourself, someone who externally resembles you so well that you cannot tell the difference. This obvious boundary marker of who we are, what we look like, becomes tested and attacked and deeply questioned. Our identities are far more abstract, far more complicated than most of us would ever like to understand or give time to study. Films, art, fiction, they’re all ways of exploring ideas which we don’t find capable of grasping fully in the real world. The masks we have worn are many, and it’s impossible to keep track of them all.

What both films do then, is confront that thorny and stubborn issue that most of us would like to avoid looking at. Both find different outcomes, different meanings in the confrontation of a divided self, but both are transfixed by the same issues of who we are, why we are, and what does it mean to be how we are. Both stories in their own right, are a struggle with how to identify who we are when our identities are in flux. At first glance it might look gloomy, the answers offered involve include lying, repression, hallucinatory madness, manipulation, a joint suicide/murder. All that can be said is that are answers which reflect the human animal, and their exaggerated struggles of holding onto the many threads of their identities is meant to resonate with our own tangled webs, our own tangled struggles.

There are no succinct answers to questions of identity, mainly because there are no easy questions. You open a box which cannot be closed, but cannot fully ever be examined, and there are more masks to try on then you or I could ever imagine. Instead, the parallel which comes to mind, comes from Herman Hesse’s Steppenwolf, a tale of a man wrestling with his own divided self. He’s told,

“Learn what is to be taken seriously, and laugh at the rest”.

And the one similarity I find most interesting between these two films, is that as both Simon and Adam reach the end of their knotted stories, both of them have the faintest smile on their faces.