Our eyes see very little and very badly – so people dreamed up the microscope to let them see invisible phenomena; they invented the telescope…now they have perfected the cinecamera to penetrate more deeply into he visible world, to explore and record visual phenomena so that what is happening now, which will have to be taken account of in the future, is not forgotten.

Working mainly during the 1920s, Vertov promoted the concept of kino-pravda, or film-truth, through his newsreel series. His driving vision was to capture fragments of actuality which, when organized together, showed a deeper truth which could not be seen with the naked eye.

In this series, which will run sporadically and when the material presents itself, I will cover documentaries which eschew the traditional forms of documentary style in favour of a more abstract (but not necessarily poetic) presentation of its subject matter, which seems to speak on a greater level than the sum of its parts.

Documentaries are not always the easiest things to watch. They look at the world in a different way, often a more reflective way and as is the case with RaMell Ross’s documentary feature, Hale County This Morning, This Evening, documentaries can create experiential rides which aren’t bound by the laws of common film practice. There is no conventional narrative or conventional narration, it’s a documentary which is not bound by the constraints of stories or the usual guided tour structure documentaries often follow. Hale County decides instead to connect the world of Hale County, Alabama to anyone who watches, through the space, the time and the inhabitants of it.

Ross’s camera orbits around certain people more than others; we follow Daniel Collins who is at Selma University on a scholarship for basketball, and his mother Mary Collins who has spent a large part of her life at the catfish plant which is the area’s largest employer. We spend time with Latrenda ‘Boosie’ Ash, and Quincy Bryant, a couple who endure life’s volatile rhythms while trying to raise their children. We meet Tomeko Elliott, Bert Williams & Nathaniel Davis, basketball players who’s moments in front of the camera resonate long after their image dissapates off screen. And there is the voluminous other faces and people of Hale County, figures which orbit in the backgrounds of images, in the soundscapes which ride along, who are just as important and rich in life to the camera’s eyes and ears as anyone else in the film.

And when the film is not accompanying the figures of Hale County’s space and time, it focuses on the place itself. Time-lapse photography of road bends, of basketball nets against the overwhelming night sky, of the animals, buildings,landscapes and the delicate, complicated images of life which have been given existence, and bottled by RaMell Ross to be witnessed. Life is presented how it often occurs, without commentary. As the smoke from a tire fire rises through the sunlight and treetops, the silence of the sequence provokes you to think, to see a reflection of life thrown back at you and to inspire (no doubt) multiple interpretations, multiple avenues of thought. The film’s imagery provokes thought, but it does not tell you what to think about. RaMell’s faith in the pure cinematic effect is breathtaking at times, as life’s various moments do more to inspire reflection and understanding than many many pieces of art I’ve seen.

But it is not just an ambigious force, unknown and left to the audience to mould it into whatever they want to see. RaMell weaves images together, physically impossible images which evoke a spirtiual understanding. At one point, Kyrie Bryant, a young child is having a bath and ends up holding the moon in her hands. I’m not clever enough to see what RaMell Ross was probably trying to evoke with it, but the experience and composition of frames such as these reach for a connection with the world, and with nature that goes beyond our normal understanding. Or as the smoke continues to rise from the tire fire, we are audio witnesses to a conversation RaMell has off camera with another man, explicitly discussing his intentions to grow a greater understanding of the black image through the use of photos and cinema. Hale County has an orbit (to use the film’s terminology) but it is a multifaceted one, concerned with a human experience as much as a black experience, and plenty more beyond that.

More and more as I get older, I realise that what you choose to put in front of the camera is where filmmakers stand. And it is important to be reminded that life is worth capturing, worth understanding, and worth showing to the world. A lot of Hale County’s worth stems from the sheer sincerity, respect and genuine love Ross possesses for the life of this world. That place of understanding drives what RaMell chooses to capture, and how it is captured. Life’s turmoil and life’s hope are presented in a way which reflects reality in a much closer way, without fictional order and dramatic hysterics. And in moving past that facade, he allows us to see Hale County and its residents, its space, its time in a way which resonates much closer to all of our lives. And that is worth championing. Because our nights and days are not infinite, but our experiences  of the world are, and our connections to them only continue to grow. 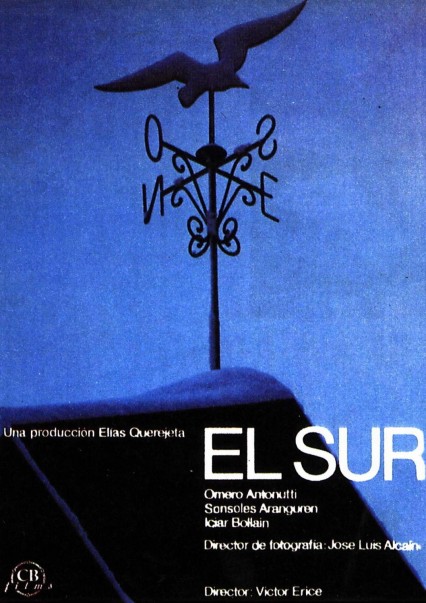 For posterity’s sake, this was the first film I watched after watching The Holy Mountain (Dir. Alejandro Jodorowsky, 1973), an audiovisual sublime tapestry of cinema, filled with psychedelic visuals and cinema so abstract you could get lost in it. To then watch a film, a film set mostly in a single house in the North of Spain, about a little girl and her relationship with her father, and the world of the adults kept hidden in all of us, with no flashy visuals or bombastic score. It was what I would define as the other end of the spectrum, a work of cinema so simple on first glance that even a child could understand its mechanics. The dense symbolism of The Holy Mountain is lost on many of its viewers, but El Sur (Dir. Victor Erice, 1983) would most likely not suffer the same fate. It is a story of memories, time and the broken, fragmentary nature of human relationships.

It is a testament to cinema, to the artistic merit, and to Victor Erice himself that the hidden depths in El Sur can evoke just as much wonderment as anything found in Jodorowsky’s film. I don’t want to make a habit of using other films as litmus tests, but I felt it particularly apt at this point. Now let’s talk about El Sur.

It is a deceptively simple film  on first glance. As I mentioned above, the usual spectacle of cinema is absent here. The spaces are limited, representative of their locales without being picturesque, only being transformed by one of the most exquisite uses of lighting  I have ever seen in a film. Most of the story is not actually seen, referring to events from the memories of the past unknown to us and the future as yet unseen. I’m reminded of a screenwriting rule I heard once which said something along the lines of “If this is not the most interesting period in the characters life, then its not worth watching”. Watching this, I’m glad to say that rule could and most likely should be broken. It seems to be a story almost composed of the parts other more conventional narrative technicians would skip, the parts which ask us as an audience to maintain an emotional communication and not much more.  The secrets stay hidden, the faces reveal only what’s on the surface and a hint, an imagining at the depths below.

Make no mistake, though the film is delicate and subtle, it is still undeniably moving and evocative. It contains one of the most beautiful edits I have ever seen, one which my words will do little justice to. I will not spoil it here by crudely recreating with words, but rest assured that it left me quietly stunned. So too the lighting and cinematography, evoking the world of painting, of the rich textured chiaroscuro found in the works of Caravaggio and others. It helps to evoke so much, textures of magic and illusion, darkness and other-worldliness, the passage of time and moods. All of this sounds non-specific, but what else can you take from a film sealed in its own timeless realm? It’s about the timeline of Estrella and her father, everything else submitted to this temporal reality. One of the most impressive things about cinema is its way to manipulate time, to not just place us in a recreated period, but to ignore the usual flow of linear time and re-arrange it as one sees fit, so that the only timeline that matters is the one created by the film. Space and what you put in front of the screen is often to do with your budget, but time is democratic in film, anyone can manipulate it.

It’s a film about people, not about plot. The story is primarily in the eyes of the actors, not in the mechanics of its story.I’m not trying to diminish the conventions of narrative cinema, I’m just trying to explain what I like so much about this film which is showing what can’t be seen, not showing what can be seen or telling rather than showing. It’s a film about the inner worlds we carry around inside of us, constantly and weighing heavy on our minds and souls.  About the frail delicate connections we have, and as we grow as people how they fade rather than change.And the actor required for such a role is always carries such an irony, because you have to act as a inward soul would act, not revealing the extent of their emotions or motivations but withholding the very things at their core which we desperately seek to understand.

Everything about this film is beautifully understated, and once again I find myself in the peculiar position of finding my words to be nothing more than a crude accompaniment to the film itself, and yet feeling very happy about this because its true language is that of cinema, communicating in images and sounds and music and the senses, rather than the written word. It’s a film which feels truthful, by straying closer to evoking the real world we live in, where our stories are not always neatly tied up and resolved, where we skip like a stone along the sea beating the other way, pushing as far as we can against a tide of unknown.

On the cover of the DVD, there is a quote from Pedro Almodóvar, which says “One of the best in Spanish Cinema history”. While I haven’t seen enough Spanish cinema to give my judgement, I can safely say this is one of the most poignant and beautifully melancholic films I’ve had the pleasure of watching recently. The art of subtlety is aptly underappreciated, and you could do a lot worse than spend some time in the presence of the dreams of the South, El Sur.