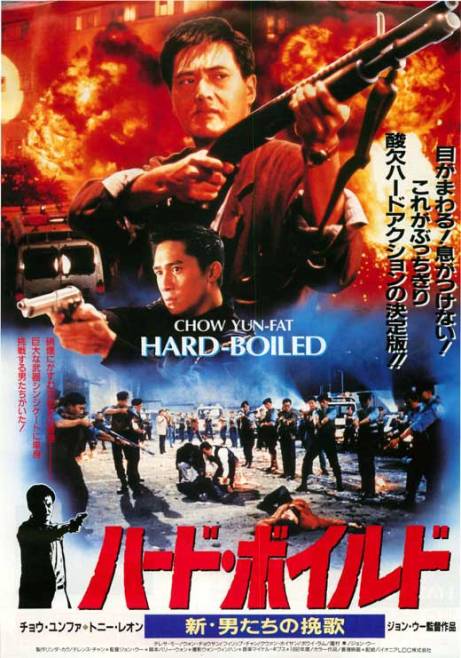 I do my best to be open to as much cinema as I can. Nevertheless, I feel like I’m naturally more drawn to cinema which confronts parts of the human condition, however well it pulls off the result. Every film has some part of that, since films are constructed almost always by humans for humans. However the range of depth found in cinema has often lead me to a particular fragment, one which often confronts the viewer with challenges and complexity and often painful experiences. You don’t have to look further than my post on László Nemes Son of Saul to get some sense of what gets written about on here.

But what about cinema of spectacle? What about cinema which doesn’t ask you to grapple with its themes and its content, which asks you to jump on board and just ride, its twist and turns in its plot rather than in its existential themes or morally grey characters. What about films which don’t ask to reinvent the wheel, merely to make one which rolls incredibly well? Hard Boiled (1992, Dir. John Woo) is that film. Cinema is not just art, its entertainment. Trying to hack off either one of its branches does a disservice to what cinema can do. But enough waxing lyrical about cinema, what about the film?

It’s difficult to apply words to Hard Boiled, since what makes it so special is precisely what can’t be described through words. Describing the unbelievably choreographed shoot-outs and stunt sequences, (most of which are still stunning to this day) many rewind worthy moments occur, particularly a scene where cop Tequila bursts out from the wall of a morgue in motion on a steel tray, before landing on a steel bed which rolls forward (all this while spraying bullets and gunning down triads) simply don’t do justice to the visual impact of actually watching these sequences unfold. The complete mastery of smooth graceful motion and construction of extravagant action sequences is Woo’s signature trademark throughout his films, and its dazzling at points.

So much of this film’s style is alien to Western sensibilities, and yet so much better for it. The cinematography is bold and distinctive, and events are replayed from multiple different angles so you can see the carnage from all angles. It’s jazzy score, considerably more dated 25 years on (at the time of writing) still showcases such an unconventional choice in the MTV music video generation. It’s locations are vast complex spaces filled with different traps and scenes which play out simultaneously, and the film relishes showing you every little point of interest. And when the colour of orange explosions is not filling your entire vision, there’s still so much going on onscreen that it’s difficult to think of a time when the compositions were ever dull or flat. It may be relentless gun violence and fetishism for nearly two hours (which is not for everyone, including myself), but you’d be hard-pressed to not admire Woo’s commitment to providing a film which sucker punches you into noticing it’s there.

It seems almost a mistake to focus on the story, since a cynical viewer could easily see the plot of the film as nothing more than a simple vehicle to drive us from fantastical action sequence to action sequence.  But to ignore that side of the world is also to make a mistake, since the characters of Hard Boiled and their borderline massacres are committed with the weight of the moral world on their shoulders. Both Tequila (Chow Yun-Fat) and Alan (Tony Leung Chiu-Wai)  are cops, enforcers of law and order, vengeful angels of society who stop the demons from taking over.

More than that, they are humans with desires, dreams, problems large and small. For all its unrelenting shoot-outs, a significant portion of the film is dedicated to Tequila and Alan’s friendship, to Tequila and Madam’s (his girlfriend) relationship issues. Even its infamously climactic hospital sequence devotes a lot of time to the issue of getting the babies out of harm’s way. These aren’t just mindless robots with no drives beyond constant one upping each other on how spectacularly they can kill each other. They may be the equivalent of mythological heroes, pulling off feats that no earthly human could achieve (Alan after getting shot in the back with a shotgun blast, still manages to pull off his part in an elaborate yacht shoot-out), but even they must have things we can relate to.

There are already a million essays sitting out there about what a masterpiece of the action genre this is, online or in books. Scott Tobias’s excellent article manages to reinforce the differences which I view this film in, in a CGI drenched world. What makes Hard Boiled pack its shotgun punch is the fact that it’s a continuous stream of elaborate real special effects. When the film released, CGI was still in its infancy and this film 20 years later still makes the case for doing things without digital painters. It’s a celluloid spectacle which is impossible to re-create with digital technology, because even if you could create that film now in an animation suite, without ever filming a single image, you would never be able to fix it in the audience’s mind that what they were watching was real. The reason why so much of the film works, is because the stunts have to be seen to be believed, but make no mistake that the stunts really were done by real people. Bikes exploded on fire in mid-air with a real rider on top of them.

I mean you just can’t make that in a computer. These little machines are incredible, but they can’t do everything. The weightlessness of destruction found in Marvel and DC’s big budget superhero movies, where cities, even entire worlds are continually razed and then replaced or reconstructed manages to lose that feeling of meaningful action this film captures. The violence and extravagance in the film may reach delirious qualities, as bullet after bullet skims across the screen, but every figure shot and every piece of scenery which explodes actually does so directly, mainly because its being shot at. As much as there is going on, Woo’s expertise is in the fact that it’s all so easy to follow.

Hard Boiled is a film where every element reacts to the persona of a director who wants the film to be enjoyed on all levels. Taken at surface level, it’s a hell of an action film. If you want to take the interpretations deeper, exploring the content and sub-conscious of the film’s themes, you can. But it wears its heart on its sleeve, it’s bloody, violent heart on its sleeve covered with gunpowder. Call me soft, but there’s something very human about that.