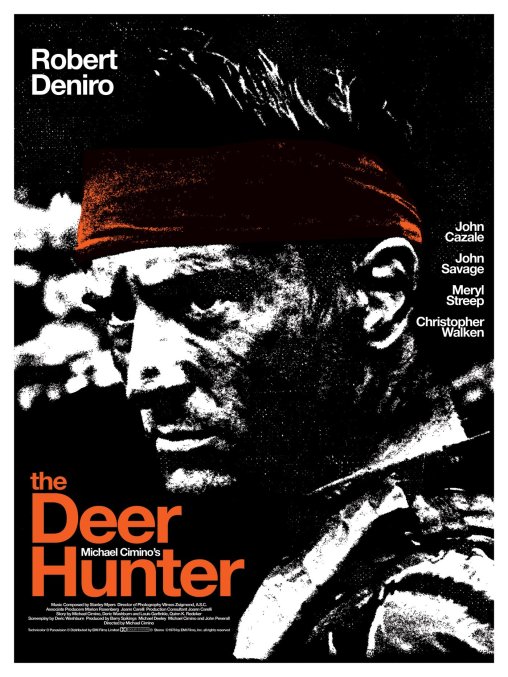 I definitely have something to say about this film. I’m 100% sure of it. I’m not entirely sure of what I have to say on it, but it has definitely provoked me into thought.

The Deer Hunter (1978, Dir. Michael Cimino) is a landmark film, regardless of the opinion surrounding it. It stands in that pantheon of 70s films made by the New Hollywood era filmmakers which was not only an international phenomenon at the time of release (among other things, happened to find out it was my grandmother’s favourite film), but it has transcended its space-time to be one of those films that you just “have to see” if you love cinema.

So what do I have to say about it that’s not been said already? Well with the passing of Michael Cimino still in recent memory, I wanted to examine what has made the film endure and what made it capture the hearts and minds of people so successfully in the first place.

The Deer Hunter follows a small group of friends in a steelworks town in Pennsylvania, all of them from a Russian American background. We’re guided through they’re world, from its opening in the steel mill itself, their downtime in the bar, a long illustrious wedding sequence (which I think must be the greatest one ever filmed), and more. I’d like to say we inhabit this world more than anything, because we spend time with all of these characters, who put the plot on the back-burner to allow us time to actually see who they are in the context of this world. We watch them in their loud moments, in happy moments and angry moments. The three dimensionality of everyone involved is paramount to the world,  and it helps to capture that feeling of life when there is no “supporting cast”, just people. It’s unbelievable how well this film manages to observe “mirth”, that warm joyous feeling of spending time celebrating with the one’s you love and know, even if they can’t keep it together for very long.

It’s this world then, this world of people who have strong faults but are not evil, that feels so close to our own and by spending so much time in it you become entrenched in their humanity. So when the film jarringly cuts to Vietnam, and we bear witness to the extensively stark scenes of Russian roulette, it hits hard just how terrifying the situation is. I found it very interesting how restrained the cinematography is in this sequence, as I feel the scenes are so intense that naturally the cinematography could have been ramped up to 11 to match it, but instead its quite restrained, allowing the performances to take center stage.

When we return from Vietnam there are no grand confrontations. I think what elevates the film in its highest points is its very absence of conventional dramatics. Mike (Robert DeNiro) and Linda (Meryl Streep) growing closer together is not a torrid love affair against all odds, it’s this quiet intimate desire for closeness that speaks to the unsaid loneliness and isolation in both of them. Mike comes back to the world fundamentally changed, evoking an experience that almost every veteran must have faced returning to civilian life. That disconnect between what you see, what you live through in wartime and how to adjust to those around you who just can’t understand. Mike’s desire to save his friends, Steven (John Savage) who’s been left with only one arm in a mobilised wheelchair and Nick (Christopher Walken) who went AWOL in Vietnam, is the one thing which cements the two periods of his life and what pushes him to return.

In the climax of the film then, the piece most ripe for dramatic confrontation, we find instead this muted, desperate pleading to save his friend. With the cinematic history of films set in the Vietnam war, the likes of the hellish Platoon (1986, Dir. Oliver Stone) and the nightmarish Apocalypse Now (1979, Dir. Francis Ford Coppola) it is strange to see a film that is so interested in rescues, in salvaging anything left rather than the hellish destruction of it all. The forces of evil in the film is the nature of war and the other side, and it’s not hard to imagine something similar happening in the camps of the Americans treating the North Vietnamese POW’s. It’s final scene, the ambiguity lending itself to those wanting to wield it as a weapon to condemn the film for being pro/anti-American is ironic to see considering the follow history of extremely anti-war films that Oliver Stone would build his career on.

But all I’ve done so far is just recount its narrative. So why did the film itself capture the imagination so powerfully, not an escapism blockbuster like we experience today but a thoughtful, emotional reckoning with American history of the time? I really can’t say for sure. Robert DeNiro’s presence must have been a massive draw, but according to my mother it was “the film which people who didn’t go to the movies went to see”. So what drew them in?

I’ll never know, I can only look at why it deserved such attention. Cinema’s history is filled to the brim with the exceptional, the out of the ordinary, the piece of gold among the rocks. What makes The Deer Hunter so very compelling is these actors are doing their best to play real people, people you imagine being on your level. When you watch someone like Humphrey Bogart in Casablanca (1942, Dir. Michael Curtiz) you wish you could be friends with him. When you watch Robert DeNiro in The Deer Hunter you feel like you are friends with him. No one is idolised in the film, no one escapes the ravages both minor and major of war. And the film is not a piece of propaganda either, even though it was held up as one by both sides. For a film so mired in the politics of the time, its focus lies on the human costs and interactions. It evokes an experience that most drafted men in America must have experienced, going off to fight a war they had little to no say in. From the ground, the politics of it all seems very far away, and I believe this must have resonated strongly.

It’s also a far more emotionally sensitive film that what had defined the American New Wave at the time. All the main characters are good guys, and I found it easy to imagine that before the war the Vietcong shown in the film could have inhabited the same space. The violence corrupts men, like an infection, and through Nick it consumes him. Under the strain of the psychological trauma, the heroin to numb the pain, its easy to see how someone can truly lose themselves so far they can’t be brought back.

I like The Deer Hunter because it’s an epic of people on a small-scale. It’s really about people, and that’s the most interesting topic out there. It’s about the long internal struggles we have with ourselves, often within us in the silence of our souls. I guess it’s a film that at its core, everyone can relate to, and that’s what makes a lie, a film filled with actors and staged action, feel honest. That’s what makes it hold the truth.

My mother told me when she saw the film in a cinema in Switzerland, behind her was a Asian couple, possibly Vietnamese, and the woman cried through the whole film. Then when they left the cinema, my mother and her partner went to dinner at a restaurant and the Asian couple also happened to be there, and she couldn’t stop crying through the whole dinner. She could have been crying for multiple reasons, for the films political views or for the noted poor treatment and one-dimensionality of the Vietnamese people, I’ll never know why she was crying. I just like to believe she was crying because it was sad.

The Deer Hunter: Lost and Found