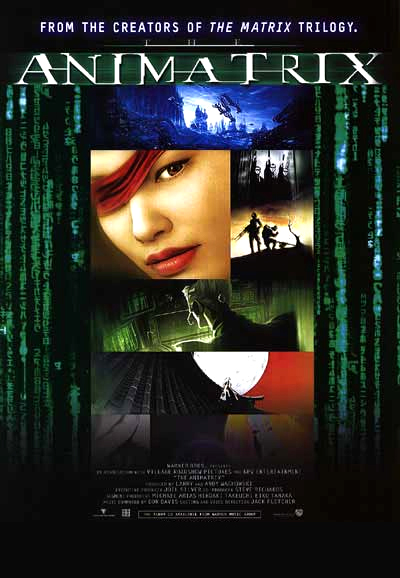 ­ In 1999, The Matrix (Dir. Andy and Larry Wachowski, now Lily and Lana Wachowski) was “the thing.” Before the heavy dominance of the superhero world, action and sci-fi reigned supreme at the mainstream box offices. And for a time, The Matrix series was a big part of the zeitgeist. Its impact spanned both the Western and Eastern hemispheres, and the disciples of this film spirit are legion (something producer Joel Silver actually predicted during its production). So now, after fifteen years since its final instalment, I thought it might be nice to do a retrospective of the series.

Regardless of your opinions on The Matrix series, the ethos of The Animatrix is one I wished existed more in film. The Wachowski’s, riding high off of the cult of long trench coats they had established with the series first instalment, set their sights higher for the rest of their stories. In the creation of its’ second and third instalments, they managed to birth this surreal side project. To create an anthology of tales to do with the world of The Matrix, but not specifically relating to its main canon of Neo. Oh, and they would all be animated, each done in a different style by exceptional animation directors from the Eastern and Western hemispheres. Shinchirō Watanabe, Yoshiaki Kawajiri, Koji Morimoto, Peter Cheung, Mahiro Maeda, Takeshi Koike and Andrew R. Jones all contributed to the project.

It’s interesting when looking back at it, to see the path the Wachowski’s carved out with this series. Because honestly projects like these in cinema, especially today are practically non-existent. The genuine example of vision here is so bold I’m kind of awed by it. Ideas in film today are so psychotically and irrationally guarded, it’s amazing to see the wildly different directors continually chewed up by the Marvel Cinematic Universe into a rainbow coloured sludge. For the Wachowski’s to offer up their baby so to speak, to the whims of other visionaries and not just through contractual obligations, but through active enthusiasm and engagement (they collaborated on each film and wrote four of the nine total scripts, one being a two-parter) is fiercely brilliant, even if it had been a colossal failure.

Fortunately, the films themselves are not colossal failures. What really gets me is the range shown, the range of ideas and the range of how much they engage with the world of The Matrix. While all are connected in some way, some are much looser than others. In particular Beyond (Koji Morimoto) about a girl looking for her cat in a house where the physics of reality (read: computer simulation of reality) stop working, is not interested in “waking up from the conspiracy”. In fact if you didn’t know it was officially part of The Matrix canon, it could very well exist without that connection, and that goes for a few of these short films. But they don’t just stand on their own; they fly.

To start, the animation styles on display here are a brilliant showcase to the world of animation. Everything from 3D CGI of western animations, to classic anime styles, to stylised pastiches of film genres, to experimental and wild animation that tears and drips out of the screen. Honestly, the project deserves to be seen just for that. It’s just wild that a project like this contains so much aesthetic variation, even if that was the intended emphasis. The animation style in a film like Matriculated (Peter Cheung) is just one I don’t have any reference point to compare to, beyond the extremes of The Holy Mountain (1973, Dir. Alejandro Jodorowsky). What an insane but cool comparison point to have! Animation has always been able to transcend the limitations of reality, and this anthology is a testament to just how far animation has been able to do that.

And the films themselves take the material of The Matrix, something they’re all fans of, and pull the ideas and themes they’re interested in and mould them into their own films. Like comic book writers taking a long-standing character, and putting their own mark on them, the world of The Matrix becomes fertile soil for these films to grow from. While I appreciate some more than others, all of them contribute a unique spin on what makes them tick when they connect with The Matrix. Program (Yoshiaki Kawajiri) is a special example of this. One only connected through the concepts involved (i.e plugging into a simulated reality), it shows what clicked in Yoshiaki Kawajiri’s mind when he built his own personal relationship to The Matrix series and ideas.

Ultimately, The Animatrix is not essential viewing in regards to The Matrix series. Besides some limited promotional screenings, it never showed in cinemas and was released direct to video/DVD. While it provides context (some of it definitely important) to the main films, those main films still function without The Animatrix. But to skip by it is a mistake for every other reason not regarding to The Matrix. Short stories are underappreciated, and anthology tales like these have the opportunity to add texture to that world, but more importantly they are original, arresting at times and beautiful to look at. They are the work of some fine animation directors experimenting in a world under the supervision of its’ original creators, a working environment unheard of in cinema. This series of films is a beacon, and one you’d do well to pay attention to. Just make sure you’ve seen The Matrix first to really get the juice out of this one.