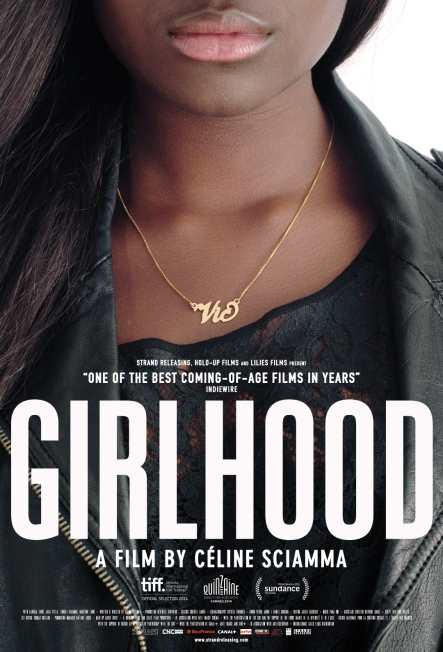 Céline Sciamma made Girlhood in a recent, but rich tradition of French films concerned with the reality of life in some of France’s sharper corners. It was my experience with La Haine (1995, Dir. Matthieu Kassovitz) in a French class at age 11 which first exposed my mind to the soulful, harsh worlds of French estate or banlieue life. But that style for a long time, has only been fully understood from the world of those angry teen boys, hyper charged and pinballing off the concrete walls of an oppressive, bleak world. Any moments of real joy, you had to look over your shoulder, because it wasn’t going to last.

But life goes on. Céline Sciamma knows that the real journey, is not just in an explosive climax, but in the moments in between as well, the moments where the sun peaks through the grey cloud cover and manages, just for a second, to shine ever so brilliantly.

Cinema has always been able to transport us. To pick us up out of our lives and replant us somewhere else, for a fleeting breath in time.  And so is the story in Girlhood, which plants us in the company of Marieme (Karidja Touré), a 16-year-old girl on the cusp of becoming a woman, with all of the trappings and the preciously rare benefits of that transition. For the world that Marieme and her friends inhabit, is one which is spiky and filled with hard-edged falls. The concrete jungle is not just an environment, it is a maze to be navigated, filled with dead ends and dangerous obstacles to be overcome or at the very least to be sidestepped. Academia is unable to support her. The quietly punishing and grinding cleaning work is a path she does not want to walk, as she watches her mother walk quietly through empty office halls. But a life of crime has its own thorns to stick in her side as well, as she is forced to contend with her identity as a woman and the possibility of her being sexually objectified becomes a disadvantage to possess.

In short, and in long, life is tough. The journey which Marieme charts is one of fiction, but one which holds an uncomfortably close reflection of the atmosphere and choices available in a poorer environment in the city. If the poor have been voiceless throughout most of history, then Girlhood is a swing back at the narrative, as Marieme’s inner identity and external world take center stage, not in a way linked to the highest echelons of power, but in the real world and the real connections around her. She must slip between the hostile societal forces, omnipresent and invisible, and the hostile personal forces in her life, very real and very physical threats to her.

What propels the story forward, gently at first but with increasing urgency later, is her continuing to rise up underneath the weight of the world. Her conditions change like the tides, but she continues to ride the waves under the increasing stresses of life. And she refuses through stubborn persistence and self-respect, to be pushed under those waves and drown. Marieme finds moments of joy, moments of power, moments of love. And when each of those moments is undone by another moment of violence, of inequality, of pain, she absorbs it and continues to step forward. Uneasy, but definitely moving. And what is powerful about it, is that Sciamma’s direction does not engage in showing either of the moments gratuitously. There are no verbose speeches written about the power of friendship, and there are no extended sequences of replicating some of the brutal physical and mental violence Marieme endures at times. These forces are alluded to continually, in the looks friends give each other, the looks family give each other. Because meaning in this world is precious, and furthermore what is the point of intellectualising those feelings, when Marieme and her friends just want to feel them? The subtext churns under the sea of Marieme’s life, and its power to envelop your attention grows with each passing minute.

All of this is captured by Sciamma’s and Crystel Fournier’s camera, one which lets every scene breath for a couple of moments before it starts. The quiet, growing pace of the film can be a little low-key at the beginning, as Marieme segues through the environment we’ll become deeply acquainted with by the end of the film. But each scene, through these moments of silence and personal solitude, speak in a way which dialogue or more obvious/dramatic ways of staging might work. The drama in Marieme’s life comes from the world around her, not from the way she sees the events. There are no virtuoso flourishes of the camera, no distracting effects only there to induce sheer cinematic spectacle. But when the camera decides to synchronise with a moment of true resonance, such as the girls dancing to Rihanna’s “Shine Bright Like a Diamond”, it sinks you under the murky seas of the world to show you the incredible, beautiful and dangerous human circus going on underneath.

Off the top of my head, I can’t think of a lot of films I’ve seen like Girlhood, and that’s really refreshing for me. Different/original does not always equal good, but it would be foolish of me not to really accept or understand just how striking Girlhood is as a piece of art. To take a journey like Marieme’s, and show it to the world and have faith that it will resonate with people. For Marieme’s life is the life a lot of us would like to ignore, of a life which is slipping through the cracks of our supposed “civilised” societies. But the film is not an attack, it’s not a sharpened spear to cut through the bullshit like La Haine was, a volatile fireball thrown into the cinematic environment. Girlhood is something much more reflective, more soothing, and ultimately more hopeful. It is not a film driven by anger, but by love. Love, despite the sufferings of the world.