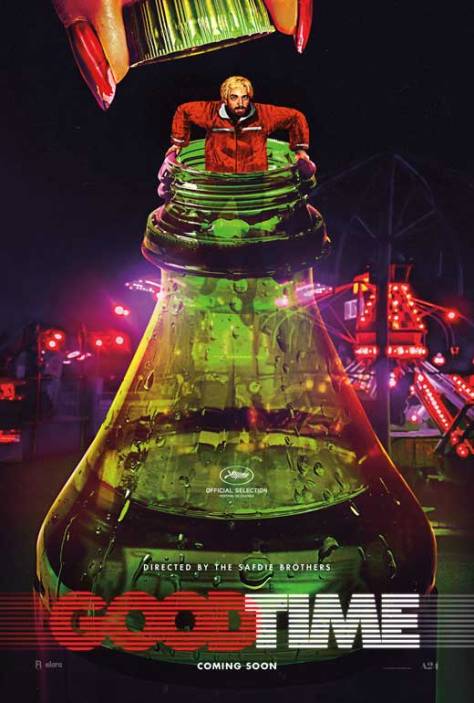 There’s something about the phrase “wild ride” that I keep coming back around to. When someone says it, it’s almost always after the ride itself (whatever form it may take) has ended. See, if it really is a wild ride then you’ll be too busy hanging on by your fingertips and trying not to get thrown off of the tracks. A wild ride is a journey someone goes on, and it doesn’t necessarily end well. But that can be said of normal rides, of boring rides, of any kind of ride. It might end poorly. What sets a “wild ride” up then I think is the energy, and the danger. The danger of the unknown, and the energy of fury and fear.

When describing Josh Safdie in an interview, they used the word “propulsion”. Defined by google, “the action of driving or pushing forwards”. Good Time then, is propulsive. Loaded onto the back of a can of Nitrous Oxide, it blisters through its 1 hour and 41 minute run time. It’s a burning can of kerosene, igniting every thing it passes through with a vibrancy attached to its sheer fiery energy. There’s a lot of descriptive words in there, but I wanted to avoid using rocket. I can’t tell you enough though, reader, this film is a like grenade going off.

Explosions are spectacular, and this one is no different. It’s style is drenched in neon and punk filmmaking techniques; hard and fast cinematography which smashes through its environment. Or its frenetic editing and sound mixing which is anxiety inducing at points, its rhythms and patterns overlapping and intentionally hard to keep track of. It’s a whirlwind of action, noise and trippy visuals which hurls you upwards into the cold eye of the storm, before dropping you down gently as the film closes. All of this is helped by the films’ genuinely wonderous score, done by electronic musician Oneohtrix Point Never. It’s synths which fly over the film’s action reminded me of some of the most pioneering work of synth music, because the synth itself was used for more than just peppy punchy “look it’s the future” aesthetic of the 80s. On a technical level its such a pure experience, everything contained in the film is designed to match the pace, the atmosphere and the intensity of any moment in the story. Honestly its a fucking delight.

A technically great but hollow film, remains a not great film. Good Time is not hollow. It is a tight, focused and coarse story, abrasive as sandpaper and having just enough depth to carry its characters down this fiery river. Connie (Robert Pattinson) pulses with a cold heart, doing his best to try to break his mentally disabled brother Nik (played by co-director Benny Safdie) out of police custody after a heist getaway fucks up, bad. Things spiral from bad to worse, mistakes are made and bridges are crossed which disintegrate right behind Connie. It doesn’t range far from this, Connie doesn’t leave any room for anything else, so consumed by his desire to “rescue” his brother from the situation he’s responsible for. Connie launches through the world and its inhabitants around him, every interaction consumed by room for manipulation, every person becomes a means to Connie’s end. And its characters (who all do an absolutely tremendous job) get caught in the blast of the grenade, all burned by his blinding fury and fear.

Where Connie lands on his descent to Earth is important, and me avoiding the ending does a disservice to just how deeply it resonates with the frail human world around us. But what gives Connie’s journey such an exhilarating feel, is that wildness, that fury combined with that fear. That’s what you are gripped on, like a merry-go-round whipping round faster and faster and you find yourself clinging to your horse for your life. Why is this wild ride, into a hell of Connie’s own making, titled “Good Time”? Why do we enjoy the darkness so much, even though it frightens us? Why do we keep trying to touch the flame even when we know it burns us? This film isn’t a thesis, it doesn’t bother answering those questions because people really in that moment don’t have time to answer them. It’s a film seen from the gutter, of people who don’t have time to reflect because they’re too busy not dying to ask questions.

They’re too busy living them, rattling along the tracks as they threaten to come off them, but having a good time all the same.