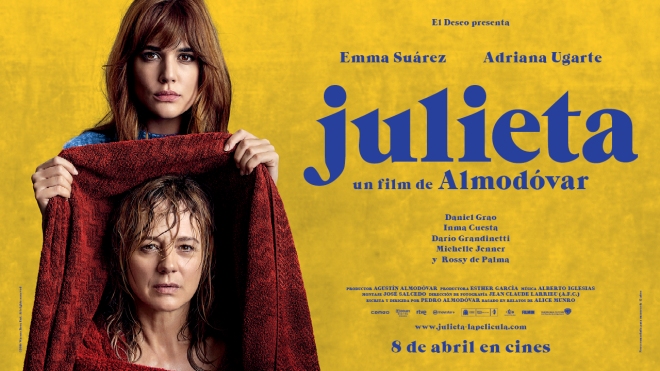 Julieta is a deep return into a kind of cinema that has been in the shadows in recent years. It’s got such a deep focus on Julieta herself, her experience in the world and how she reacts to the trials of love, family and the pleasures and pain incurred by both, that it functions in a way I find quite resonant, and more importantly, quite antithetical to the current trend of plot driven, beat driven films. I’m also probably reasonably biased towards the film, because the women concerned in this film are such intimate and resonant portrayals of a kind of women I have had experiences of, being the son of a Portuguese woman, that I find it difficult to have anything other than admiration and affection for the characters in this film.

Julieta doesn’t actually have a villain, or an antagonist of any sorts, perhaps beyond the human condition. Perhaps you can argue Julieta’s depression is her demon, but it still feels rather fake to project that point. If anything, the thing I cannot get over is the ability for the film to feel real. It follows a tale of wholly personal stakes about a Spanish women named Julieta who falls in love, has a child, grows estranged from the child over the mourning of her lover who is caught in a storm, who would not have gone out if Julieta and he (Xoan) had not fought. The rest of the film concerns her looking for her daughter, but it all takes place in flashbacks, so the structure is akin to remembrance and memory, often accompanied by visuals of Julieta writing her story to her daughter.

The flashy point of the film, is where Julieta replaces Julieta, or rather, when Adriana Ugarte (Julieta), a limp melancholic depressive being dried off under a red towel by her daughter and her friend, is replaced by Emma Suaréz (Julieta) who transitions into the role. As a mechanic for showing the repitition and passing of time in a singular person, it’s oddly beautiful and muted. However the film takes an intimate perspective, never expanding beyond Julieta’s experience, never giving us that God’s Eye Perspective(TM) that filmmakers rely on so unconsciously, that ability to make the camera separate from the experience of any one individual character, to tell multiple stories concerning multiple people. Julieta, as per its title, is interested in Julieta. It’s a bold stylistic choice, which I’m sure is key to why its response was not overly celebratory, but it’s one that helps to give the film just the right tinge of personal experience.

Almodóvar has a strong reputation for making films about women, and I think the key thing is perhaps because he has such a strong affection and resounding love for  women and their viewpoints, he simply creates worlds where they are at the center, where their struggles might be sidelined or simply ignored in other narratives, become the full encompassing picture in these works. A strand of thematic DNA. I cannot speak more on this, since I have not seen much of his work. But Julieta fills such a breadth of images, mother, daughter, lover, wife, that the only word for really summing her up is Julieta itself.

Julieta just exudes passion. It’s rich and lush colours, its vibrant characters emoting a world, that of rural Spanish villages, of coastal hardships, of suburbanite living in the inner city. The film’s love affair with the world is channeled through Julieta’s relationships. And in fact, the sufferings that occur in her story of one’s of loving too much, of wanting to protect those near us, of the desperation to keep the one’s we love close to us, where we can see them. The emotional wounds are inflicted by people out of love, and its a sentiment that should be witnessed by others.

It’s easier to accept that hate comes from fear, but its harder to accept that love also comes from hope and fear combined, hate capturing a perverted hope which might wish upon those we dislike vicious and unkind things. But in a painfully honest scene where Julieta confronts Xoan over his amorous adventures with a friend of theirs, Ava, the seas churn under the storm. Xoan’s issue is he loves too much, and therefore cannot be faithful, whereas Julieta’s issue is his infidelity leads her to believe he cannot truly love her enough. A curious paradox, deftly handled.

And the development of it is rather poignant, because rather than a melodramatic caustic explosion, Julieta and Ava stay bonded,  even come closer together after Xoan’s passing. Because life doesn’t separate easily, and they are kept close by a bond they both shared, friendship. It’s not easy to accept that part of their lives, and they struggle with it, pushed down to the depths of the inner seas we carry around with us. The silence only brings more pain and heaviness to bear, but like all under the surface, it’s never known to those outside us until we bring it forth.

The acceptance of painful messy truths brings real melodrama to the film, because it is not contrived and more importantly, its earnest.The trials we may experience in our personal lives may not be much in comparison to the greater issues that consume our greater world, but the intimate burdens we carry with us only get heavier as time passes. This is why Julieta works, because the only true antagonist, when you strip away the layers of life, is the pleasures and pains we cause each other. I love Julieta because Julieta loves, and if this work comes across as messy or incoherent, remember its done from a place of passion and love.